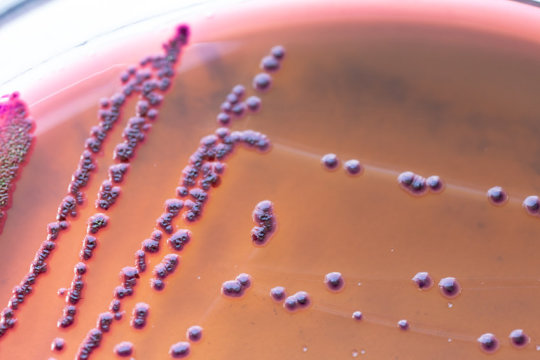 For over a century, scientists have studied E. coli, one of the bacteria that cause food poisoning, as a model for fighting infections. Such research has led to a variety of antibiotics that penetrate the protective cell walls of bacteria to kill them.

Now, a multi-university study led by Stanford bioengineer KC Huang reveals that E. coli has managed to keep a big secret about its defenses. He and his collaborators report in Nature that scientists had overlooked the astonishing physical strength of the thin outer membrane that clings to E. coli‘s stout cell wall.

Scientists had long known that many bacteria have outer membranes. But until now researchers thought of it like a layer of shrink wrap that simply made it tougher to get antibiotics into cells. But as the new study shows, the outer membrane physically protects the cell and could be a good target for a new class of antibacterial drugs.

“We’ve discovered that the outer membrane can act as a suit of armor that is actually stronger than the cell wall,” said Huang, an associate professor of bioengineering and of microbiology and immunology. “It’s humbling to think that this function had been hiding in plain sight for all these years.”

Huang said the findings suggest new infection-fighting strategies for the roughly half of all bacterial species that, like E. coli, have outer membranes. “If we can attack the outer membrane, infectious bacteria will be pre-weakened for targeting with antibiotic treatments that disrupt cells in other ways,” he said.

“Scientists knew that outer membranes were chemical shields,” Huang said. “Thus, it was easy to relegate this third layer to an annoyance when dosing the cell with antibiotics.”

In recent years, however, researchers have had clues that the outer membrane is more important than they’d thought. In one study, Huang’s lab removed E. coli‘s cell wall but left its outer membrane intact. Unsurprisingly, the bacteria lost their cucumber shape and became blobs. But a large fraction of these blobs survived, multiplied and ultimately regenerated new cucumber-shaped E. coli.

Enrique Rojas, a former postdoctoral scholar in Huang’s lab and first author on the new paper, said that study was a clue that the outer membrane must play important structural and protective roles.

“We just listened to the data. Science is about data, not dogma,” said Rojas, now an assistant professor of biology at New York University.

They suddenly collapsed the pressure inside the bacteria, but instead of causing the cell wall to massively shrink, as prevailing assumptions would have predicted, they found that the outer membrane was strong enough to almost entirely maintain E. coli‘s cucumber shape.

In other experiments, they put E. coli cells through two hours of rapid increases and decreases in pressure. E. coli cells normally shrug off these repeated insults and grow as if no changes at all had occurred. However, when the researchers weakened the outer membrane, cells died quickly.

“The presence or absence of a strong outer membrane is the difference between life and death,” Huang said.

The experiments identified a handful of components that give the outer membrane its surprising strength. Drugs that destabilize the deceptively thin outer layer could help destroy infectious bacteria, Huang said.

Huang added that the findings are part of an emerging field of study called mechanobiology. Whereas scientists once viewed cells as sacks of chemicals to be studied by chemical means, today a confluence of tools reveal the infinitely complex structural properties that make cells and organs tick.

“It’s a very exciting time to be studying biology,” Huang said. “We are approaching the point at which our tools and techniques are becoming precise enough to discern, sometimes at almost the atomic level, the physical rules that give rise to life.”