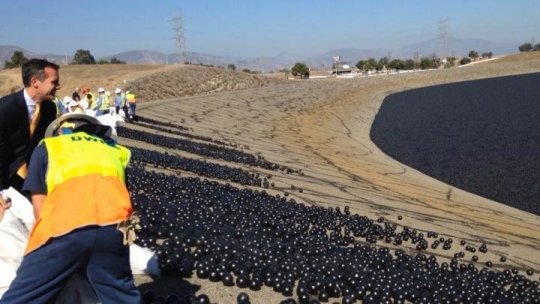 Preventing reservoir evaporation during droughts with floating balls may not help conserve water overall, due to the water needed to make the balls.

During droughts, communities may rely on water stored in reservoirs. However, significant amounts of water can evaporate from the surface of the reservoir.

Amid California’s latest drought, which lasted from 2011-2017, 96 million ‘shade balls’ were deployed on the Los Angeles reservoir. These floating, black plastic balls cover the water surface to prevent evaporation.

However, a new study published today in Nature Sustainability shows that producing the balls probably used more water elsewhere than was saved during their deployment — which could have knock-on environmental impacts.

The balls were deployed on the reservoir for one and half years during the latter part of the drought. For each drop of water saved by the balls, however, the study estimates that more than one drop would have been used up in another part of the country or the world.

Co-author Dr Kaveh Madani, from the Centre for Environmental Policy at Imperial College London, said: “We are very good at quick technological fixes, but we often overlook the long-term and secondary impacts of our solutions. This is how the engineering community has been solving problems; solving one problem somewhere and creating a new problem elsewhere.”

The study team from Imperial, M.I.T. and the University of Twente predict the balls would have to be deployed for two and half years before the water they saved matched the water they used.

However, this is only if they were preventing evaporation at the same rate even outside the dry period; when not in drought conditions, the balls are expected to be less efficient at preventing evaporation, meaning they would have to be deployed for longer to save as much water as they used.

As more extreme temperatures and more frequent droughts are predicted to occur due to climate change, water management will become an important topic in the coming decades. Dr Madani said: “We are not suggesting that shade balls are bad and must not be used. We are just highlighting the fact that the environmental cost of shade balls must be considered together with their benefits.”