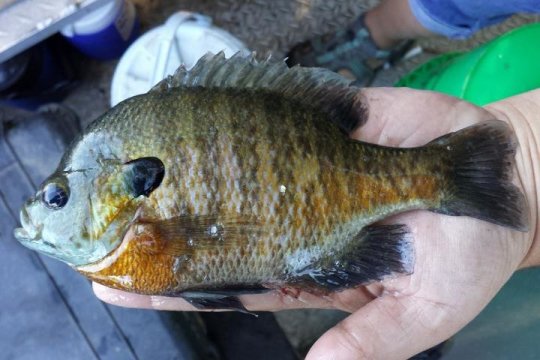 The bluegill on your dinner plate might have been more social than the rest of its group, according to a new study from the University of Illinois, and its removal from the lake could mean major changes for the remaining population.

“There’s a reason everyone’s first fish is bluegill. They are social fish, forming big groups around structures close to shore. It seemed like their social behavior and their aggression would be super important in terms of angling vulnerability,” says Michael Louison, lead author on the study and graduate student in the Department of Natural Resources and Environmental Sciences and the Illinois Natural History Survey at U of I.

Testing this hypothesis meant a week’s worth of fishing for Louison, an avid angler. He first stocked an experimental pond with bluegill from a hatchery, each of which had been tagged to allow identification of individuals.

“They had been living in a natural lake environment,” he says. “They had to find food and avoid predators in that environment. So they were ‘real fish.'”

Over five days, he and another angler fished the pond using typical equipment and methods for bluegill. When they’d catch a fish, they’d quickly check the fish’s identification number and release it back into the water. At the end of the week, they drained the pond and brought all the fish they could find back to tanks in their laboratory. They assigned 38 fish to a test group: Half of these had been caught at least once, while the others had never been caught.

To determine if there was a sociability difference in fish that took the bait versus their uncaptured counterparts, Louison and his research team devised a simple test. They split an ordinary rectangular fish tank in half with a glass divider, placing a test fish on one side and six random bluegills from the pond on the other.

Louison thought aggression might also make a fish more likely to attack bait, so he paired one fish from the test group with another fish from the pond in an open tank.

“In every case, one fish emerged as dominant. It would be hanging out in the center of the tank, with the other fish driven into the corner. Every time the submissive fish tried to come back into the center, the dominant fish would attack it and drive it back to the side,” he says.

Interestingly, fish that had been caught were not more aggressive or dominant than uncaptured fish. Only more social.

If anglers are removing the most social fish from bluegill populations, what does that mean for the fish left behind? Louison thinks it could change the entire social structure, at least in the short term, potentially leaving the remaining fish at risk.

“Broadly speaking, for animals living in groups, social individuals are really important. They help spot predators, find prey, and transmit information about these things to the rest of the group,” says Cory Suski, associate professor in the Department of Natural Resources and Environmental Sciences and co-author on the study.

“Our previous research has shown that removing fish with certain characteristics — like parental quality or even overall vulnerability to angling — has potential to change the character of a population,” says Jeffrey Stein, fish ecologist at the Illinois Natural History Survey and co-author of the study. “Understanding how characteristics like sociability affect vulnerability to angling can lead to more effective management of high-quality recreational fisheries.”

The researchers don’t know whether bluegills adjust their social groups when a particularly gregarious individual is removed, or whether consistent removal of these fish through angling might constitute a long-term evolutionary shift.

“In this experimental setting, we’ve shown that sociability could be under selection by anglers. The next step, which is more difficult to do, is to actually go out into wild populations and evaluate whether we see differences in behavior in fish in heavily fished lakes versus lakes back in the woods where only one person might fish. That’s the next step,” Louison says.