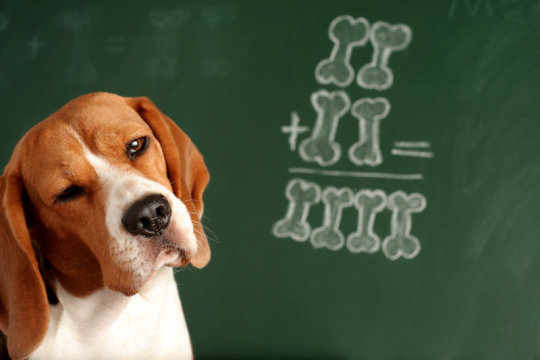 Biology Letters published the results, which suggest that a common neural mechanism has been deeply conserved across mammalian evolution.

“Our work not only shows that dogs use a similar part of their brain to process numbers of objects as humans do — it shows that they don’t need to be trained to do it,” says Gregory Berns, Emory professor of psychology and senior author of the study.

“Understanding neural mechanisms — both in humans and across species — gives us insights into both how our brains evolved over time and how they function now,” says co-author Stella Lourenco, an associate professor of psychology at Emory.

Such insights, Lourenco adds, may one day lead to practical applications such as treating brain abnormalities and improving artificial intelligence systems.

Lauren Aulet, a PhD candidate in Lourenco’s lab, is first author of the study.

The study used functional magnetic resonance imaging (fMRI) to scan dogs’ brains as they viewed varying numbers of dots flashed on a screen. The results showed that the dogs’ parietotemporal cortex responded to differences in the number of the dots. The researchers held the total area of the dots constant, demonstrating that it was the number of the dots, not the size, that generated the response.

The approximate number system supports the ability to rapidly estimate a quantity of objects in a scene, such as the number of predators approaching or the amount of food available for foraging. Evidence suggests that humans primarily draw on their parietal cortex for this ability, which is present even in infancy.

This basic sensitivity to numerical information, known as numerosity, does not rely on symbolic thought or training and appears to be widespread throughout the animal kingdom. Much of the research in non-humans, however, has involved intensive training of the subjects.

Previous research, for example, has found that particular neurons in the parietal cortex of monkeys are attuned to numerical values. Such studies had not clarified whether numerosity is a spontaneous system in non-human primates, because the subjects underwent many trials and received rewards for selecting scenes with greater numbers of dots in preparation for the experiments.

Behavioral studies in dogs that were trained in the task of discriminating between different quantities of objects have also indicated that dogs are sensitive to numerosity.

Berns is founder of the Dog Project, which is researching evolutionary questions surrounding man’s best, and oldest friend. The project was the first to train dogs to voluntarily enter an fMRI scanner and remain motionless during scanning, without restraint or sedation.

Eleven dogs of varying breeds were involved in the current fMRI experiments. The dogs did not receive advance training in numerosity. After entering the fMRI, they passively viewed dot arrays that varied in numerical value. Eight of the 11 dogs showed greater activation in the parietotemporal cortex when the ratio between alternating dot arrays was more dissimilar than when the numerical values were constant.

“We went right to the source, observing the dogs’ brains, to get a direct understanding of what their neurons were doing when the dogs viewed varying quantities of dots,” Aulet says. “That allowed us to bypass the weaknesses of previous behavioral studies of dogs and some other species.”

Humans and dogs are separated by 80 million years of evolution, Berns notes. “Our results provide some of the strongest evidence yet that numerosity is a shared neural mechanism that goes back at least that far,” he says.

Unlike dogs and other animals, humans are able to build on basic numerosity in order to do more complex math, drawing primarily on the prefrontal cortex. “Part of the reason that we are able to do calculus and algebra is because we have this fundamental ability for numerosity that we share with other animals,” Aulet says. “I’m interested in learning how we evolved that higher math ability and how these skills develop over time in individuals, starting with basic numerosity in infancy.”

The work was supported by the National Institutes of Health, the John Merck Fund and the Office of Naval Research.