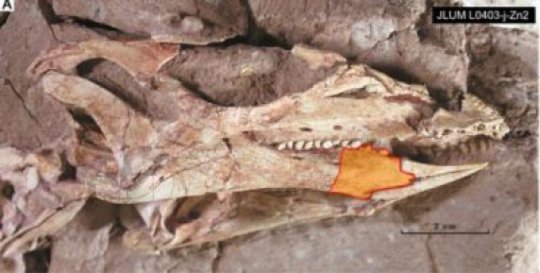 The teeth of Changchunsaurus parvus, a small herbivorous dinosaur from the Cretaceous of China, represent an important and poorly-known stage in the evolution of ornithopod dentition, according to a study released November 7, 2018 in the open-access journal PLOS ONE by Jun Chen of Jilin University in China and colleagues.

Ornithischian (“bird-hipped”) dinosaurs developed an incredible diversity of teeth, including the famously complex dental batteries of derived ornithopods, but little is known about how these intricate arrangements arose from the simple tooth arrangements of early dinosaurs. Changchunsaurus parvus belongs to an early branch at or near the origins of the ornithopods, and thus may provideinsight into the ancestral state of ornithopod tooth development. In this study, Chen and colleagues took thin sections from five jaw bones of Changchunsaurus to investigate tooth composition as well as how the teeth are maintained throughout the life of the animal using histological techniques.

Among the notable features of Changchunsaurus dentition is a unique method of tooth replacement that allowed it to recycle teeth without disrupting the continuous shearing surface formed by its tooth rows. The authors also found that the teeth feature wavy enamel, a tissue type formerly thought to have evolved only in more derived ornithopods. The authors suspect these features may have arisen early on as this group of dinosaurs became specialized for herbivory.

Features of the jaws and teeth are often used to assess dinosaur phylogeny. In addition to investigating the evolution of ornithopod dentition, this study also identifies new dental traits that might help sort out ornithischian relationships in future analyses. But the authors note that this is only the first in-depth study at a dinosaur near the base of the ornithopod family tree, and that more studies on more dinosaurs will be needed to fill in the full picture of this group’s evolution.

Professor Chen Jun summarizes: “These tissue-level details of the teeth of Changchunsaurus tell us that their teeth were well-adapted to their abrasive, plant-based diets. Most surprisingly, the wavy enamel described here, presumably to make it more resistant to wear, was previously thought to be exclusive to their giant descendants, the duckbilled dinosaurs.”