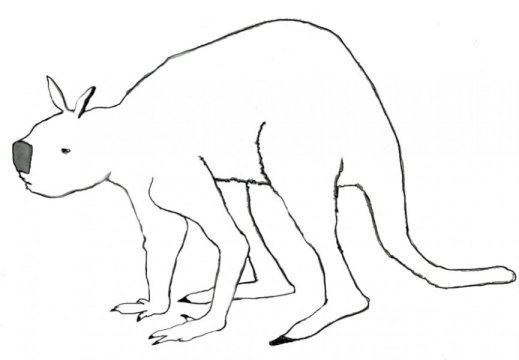 A Queensland University of Technology (QUT) led collaboration with University of Adelaide reveals that Australia’s pint-sized banded hare-wallaby is the closest living relative of the giant short-faced kangaroos which roamed the continent for millions of years, but died out about 40,000 years ago.

The analysis was conducted by QUT evolutionary biologists PhD researcher Manuela Cascini and Associate Professor Matthew Phillips, from the Science and Engineering Faculty, in collaboration with University of Adelaide’s Professor Alan Cooper and Dr Kieren Mitchell, who undertook the DNA sequencing at the Australian Centre for Ancient DNA.

Lead author Ms Cascini, a molecular biologist who moved from Italy to undertake her PhD research with Associate Professor Phillips, said her project also involved analysis of mtDNA sequenced from the inner ear bones of another ancient extinct macropod that was found in Tasmania — the giant wallaby, Protemnodon anak, which weighed up to 150 kilograms.

Small fragments of ancient DNA sequenced from this giant wallaby species and from the giant short-faced kangaroo were first reported on by University of Adelaide scientists in 2015.

“Our analysis confirmed their conclusion that the giant wallabies are close relatives of the iconic living ‘Macropus’ genus of kangaroos and wallabies,” Ms Cascini said.

“However that earlier study provided insufficient DNA to confidently place the giant short-faced kangaroos on the evolutionary tree.

“We’ve now been able to show the strongest evidence yet that the closest living relative of these massive Sthenurinae kangaroos, which weighed up to about 240 kilograms, is the tiny, 2-kilogram banded hare-wallaby. These wallabies live in the wild only on islands off Western Australia and are classified as vulnerable.”

Associate Professor Phillips said the larger amount of mtDNA sequenced in this study by the University of Adelaide collaborators helped enable the strong finding on the banded hare-wallaby link.

“This is by far the most genetic data that anyone has extracted out of Australian megafauna, and it was taken from the petrous bones which are denser and often seem to hold DNA better,” he said.

“You find a lot of ancient DNA studies of megafauna from permafrost in northern Europe and northern America because the cold helps preserve the DNA. But in Australia the hotter climate and older age of the megafauna is far less favourable for DNA preservation.”

Dr Mitchell said Tasmania’s cooler climate and higher-altitude caves “make for much better DNA preservation than we find elsewhere in Australia, so we focused our hunt for high-quality megafaunal DNA there.”

Associate Professor Phillips said other findings of the study on the evolution of kangaroos and wallabies (macropods) included: