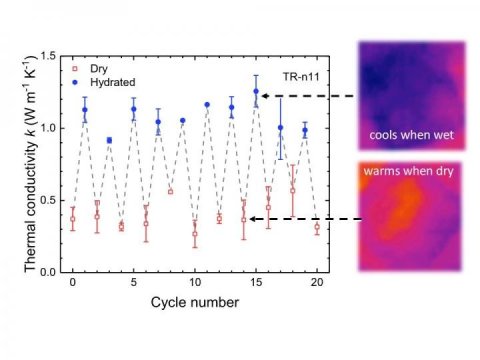 Tuning materials for optimal optical and electrical properties is becoming commonplace. Now, researchers and manufacturers may be able to tune materials for thermal conductivity by using a squid-inspired protein made of multiple DNA repeats.

“Controlling thermal transport in modern technologies — refrigeration, data storage, electronics or textiles — is an unsolved problem,” said Melik Demirel, professor of engineering science and mechanics and director, Center for Research on Advanced Fiber Technologies at Penn State. “For example, most standard plastic materials have very low thermal conductivity and they are thermal insulators. These squid-based bio-materials that we are working on have low conductivity at ambient humidity, but they can be engineered so that their thermal conductivity increases dramatically.”

One potential use of this bioprotein film might be as a fabric coating, especially for athletic wear, said the researchers. The material could be perfectly comfortable and cozy in everyday use, but when actually used for heavy activity, the sweat produced by the wearer could “flip” the thermal switch and allow the fabric to remove heat from the wearer’s body.

Demirel and his team have designed synthetic proteins that are patterned on tandem repeating sequences. They are able to choose the number of repeats they want and investigate how the various proteins react, in this case, to moisture.

“Under ambient conditions — less than 35 percent humidity — the thermal conductivity of these proteinaceous films do not depend on repeat units or molecular weight, and demonstrate similar thermal conductivities to disordered polymers and water-insoluble proteins,” the researchers report today (Aug. 13) in Nature Nanotechnology.

“Because the thermal conductivity when wet is linearly related to the number of repeats, we can program the amount of thermal conductivity into the material,” said Demirel. “So, we could make better thermal switches, regulators and diodes similar to high-performance devices to solve the problems in modern technologies such as refrigeration, data storage, electronics or textiles.”

When the material returns to normal ambient humidity or lower, the switch turns off, and the protein no longer conducts heat as efficiently.