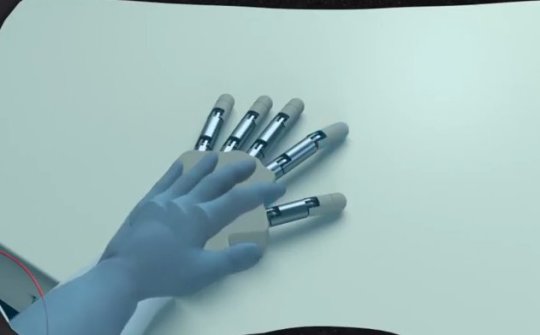 The underlying problem is twofold. Amputees still feel their missing limb, even if it is physically gone, and this ghost limb aka phantom limb is perceived as much smaller that the lost limb. Next, the commercially available prosthetic limb does not yet provide sensory feedback other than what the patient sees, meaning that the patient has no sense of touch from the prosthetic limb and must constantly watch it for correct use.

Tricking the brain to embody the prosthetic limb

Now, in a scientific collaboration led by EPFL (Ecole polytechnique fédérale de Lausanne), scientists show that amputees can actually be convinced that the prosthetic hand belongs to their own body. They do this by going beyond the “seeing is believing” idiom based on established research on how the brain identifies what belongs to its own body. Instead of using the sense of sight alone, they used an astute combination of two senses: sight and touch. The results are published today in the Journal of Neurology, Neurosurgery & Psychiatry.

“The brain regularly uses its senses to evaluate what belongs to the body and what is external to the body. We showed exactly how vision and touch can be combined to trick the amputee’s brain into feeling what it sees, inducing embodiment of the prosthetic hand with an additional effect that the phantom limb grows into the prosthetic one,” explains Giulio Rognini of EPFL’s Laboratory of Cognitive Neuroprosthetics led by Olaf Blanke, in a collaboration with Silvestro Micera of EPFL and Scuola Superiore Sant’Anna in Italy. “The setup is portable and could one day be turned into a therapy to help patients embody their prosthetic limb permanently.”

In two hand amputees, the scientists provided artificial tactile sensations at the tip of the index finger — of the phantom limb — by stimulating the patient’s nerve in the stump. At the same time, the patient wore virtual reality goggles which showed the index finger of the prosthetic limb glowing in synchrony with the administered touch sensations. This combination of virtual reality with artificial tactile sensations takes the rubber-hand illusion to another level.

Both patients reported feeling as though the prosthetic hand belonged to their own body. Moreover, when asked to evaluate the position of their hands, both patients felt as though their phantom limb had extended into the prosthetic limb. Previous to the experiment, they both reported that the phantom hand was small and directly connected to the stump, as if the phantom limb had no forearm, a change in size referred to as “telescoping” in scientific jargon. In fact, their phantom limb extended during the experiment, and remained extended for up to 10 minutes afterwards.

The experiment simply requires the patient to passively observe two sensations on the fingertip, the visual glow and the artificial touch happening in synchrony, in order for embodiment and extension of the phantom limb to take place. This is the first time that the principles of multisensory integration, in particular how the brain integrates bodily multisensory information to create the coherent and compelling experience of having a body, have been tailored to provoke embodiment of the prosthetic hand and reduction of telescoping.

Building upon results from a European-wide collaboration

The study builds upon research that opened new avenues is prosthetics. In 2014, in a European collaboration led by EPFL, scientists overcame a major hurdle by giving an amputee the ability to feel — in real-time — with the help of their prosthetic hand. Information about touch coming from sensors at the prosthetic fingertips were directly processed and relayed into the nervous system via electrodes that were surgically wired to the stump’s main nerves. The potential of this technology is still being explored, and two years later in 2016, the scientists showed that the enhanced prosthetic technology could even help the same amputee detect differences in texture.