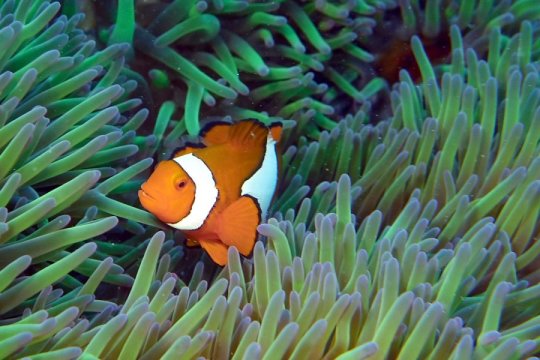 Strap on a diving mask and fins and slip under the crystal-clear water near a coral reef in Indonesia, Papua-New Guinea or the Philippines, and you’ll immediately see why divers and snorkelers from across the world flock to the area. Known as the Coral Triangle, the region is famous for its unmatched diversity of reef fish and other marine creatures.

Fish of all shapes and colors dart in and out of crevices created by the dazzling shapes of corals, colorful sponges and other reef-building organisms. With a little luck, a diver might catch a glimpse of a shark patrolling the reef or a turtle soaring across the landscape of colors.

While underwater enthusiasts have long known and cherished the biodiversity in the Central-Indo Pacific Ocean, scientists have struggled for more than half a century to explain what exactly makes the region the world’s No. 1 hot spot of marine biodiversity and sets it apart from other marine regions around the world.

Several hypotheses have been put forth to explain the Central-Indo Pacific region’s extraordinary diversity. Some researchers suggested species emerge at a faster rate there compared to other parts of the world’s oceans, while others attributed it to the region’s central location between several species-rich swaths of ocean in the broader Indo-West Pacific. Still others pointed to the region’s low extinction rates.

Now, a study led by University of Arizona doctoral student Elizabeth Miller has revealed that Indo-Pacific coral reefs have accumulated their unrivaled richness of fish species not because of some unknown, elusive quality, but simply because they had the time.

“People used to think that new species evolve more quickly in tropical marine areas, so you get the high diversity we see today very quickly,” Miller said. “Instead, we found that diversity in the Central-Indo Pacific has slowly built over a long time.”

The study, published in the journal Proceedings of the Royal Society of London on Oct. 10, is the first to show a direct link between time and species richness, according to Miller.

Until now, Miller explained, it was widely believed that tropical coral reefs, similar to tropical rain forests, are hot spots of biodiversity because of an intrinsic propensity to diversify into more species than other regions. Her research showed that wasn’t the case.

The team discovered that speciation rates are actually higher in cold marine areas such as the Arctic and Antarctic. However, while changes in biodiversity in the Central-Indo Pacific region could be compared to a slow but long-burning flame, in colder ocean regions, they are more like fireworks.

“There, species evolve relatively quickly, but each glaciation period clears out much of what was there before,” Miller said. “Once the glaciers recede, they leave empty niches waiting to be repopulated by new species.”

In the Coral Triangle, on the other hand, new species have evolved less rapidly, but because conditions have been much more stable over long periods of geological time, they were more likely to stick around once they appeared and slowly accumulate to the biological diversity we see today.

“This suggests that a region may need long-term stability to accumulate high species diversity,” Miller said. “According to our study, the magic number appears to be 30 million years.”

In the Central-Indo Pacific, plate tectonics created a wide platform of shallow ocean, while its central location made it a target for colonization. It was the right place at the right time for the fishes that colonized the region.

“Things haven’t changed much there in the past 30 to 35 million years,” Miller said. “In contrast, other marine regions, such as the Caribbean, underwent periods of instability and isolation, and therefore fewer colonizations and higher rates extinction of the lineages that were there previously — all those factors add up to less evolutionary time.”

For the study, Miller and her team used distribution data of almost all spiny ray-finned fishes — 17,453 species in total, representing about 72 percent of all marine fishes and about 33 percent of all freshwater fishes. They used several different statistical methods to reconstruct the causes of underlying species richness patterns among global marine regions.

To disentangle how marine fish diversity unfolded over time, the team then used a published evolutionary tree of this fish group and performed biogeographic reconstructions.

“Biogeographic reconstructions help us understand where ancestors were living at various places back in time, based on where species live today and how they are related,” Miller said. “It’s easy if you only compare two species that live in the same place, but if you have thousands of species and go back further and further in time, more ancestors come into play and things become more difficult.”

Evolutionary biologists rely on sophisticated computer algorithms to manage and interpret the extremely large data sets. The method used by Miller and her team created many hypothetical scenarios of where species evolved. The researchers then used these scenarios to test how different models explain today’s biodiversity.

“It’s like drawing family histories, each slightly different,” Miller said. “You start out with analyses and repeat them hundreds of times, each time based on some possible history to try and encompass uncertainty to see how they play out. In our study, it turned out the uncertainty is low, which is reassuring. It means it’s a really robust result.”

The general idea that patterns of diversity can be explained by how long a group has been present rather than how quickly they proliferate is relevant to lots of different systems, according to the researchers. For example, biologists have observed that the timing of colonization explains the high diversity of certain animal groups in terrestrial ecosystems, such as treefrogs in the Amazon rainforests, salamanders in the Appalachian Mountains and lizards in the desert Southwest.

“The general takeaway is that these patterns of high diversity may take tens of millions of years to arise, but can be wiped out in a few years by human impacts,” said John Wiens, senior author of the paper and a professor in the UA Department of Ecology and Evolutionary Biology. “Unfortunately, the high diversity of reef fish in the Coral Triangle may soon disappear because of the impacts of human-induced climate change on coral reefs. The diversity that gets lost in the next few years may take tens of millions of years to get back.”