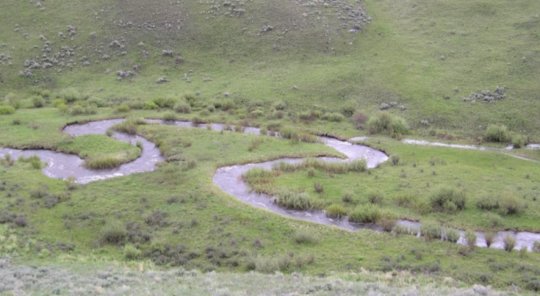 In the first study of its kind, research by Oregon State University scientists shows that the return of large terrestrial carnivores can lead to improved stream structure and function.

The findings, published today in Ecohydrology, are important because they highlight the role big predators play in the health of aquatic and riparian ecosystems.

Robert Beschta and William Ripple of the OSU College of Forestry looked at stream-bank willows over a 13-year period along two forks of a creek in Yellowstone National Park, first in 2004 and again in 2017.

The study, funded in part by the National Science Foundation, began nine years after wolf reintroduction in Yellowstone and two decades after cougars had returned to the park.

Gray wolves and cougars had been hunted to extirpation in Yellowstone by the early 1900s, allowing for an abundance of elk that ate so much willow as to erode stream banks and damage waterways the shrubs had historically protected.

Beschta and Ripple examined willows along the west and east forks of Blacktail Deer Creek in the northern portion of the park.

“In the 1990s, elk were still keeping the willows short, usually less than 2 feet tall, and that led to stream widening — oversized cross sections of channel and a drastically reduced frequency of overbank flows,” Beschta said. “But by 2017, willow heights greater than 6 feet were prevalent and canopy cover over the stream, which had essentially been absent in 1995, had increased to 43 percent and 93 percent along the west fork and east fork, respectively.”

Increases in willow height, greater canopy cover, and stream-bank stabilizing courtesy of well-vegetated banks all point toward a recovering riparian/aquatic ecosystem, he said.

Beschta notes, however, that the healing is in its early stages and the recovery of stream channels may be slow in some areas.

“The over-widened streams that resulted when elk were able to browse on willows as they did when wolves and cougar were absent, that’s a big change that’s taken place and may become a legacy effect,” he said. “In some areas these geomorphic changes to channels may not be quickly reversible and could be there for a long time.”

Nevertheless, the ecosystem improvements that have already happened show the many positives of having a full guild of large carnivores present.

“The cougars had been back for a while, and the bears have always been there, but they were unable to control the elk populations or at least their browsing,” Beschta said. “It wasn’t until wolves were returned that we got this reshuffle in what elk were doing and we began to see improvement in plant communities and streams. This is the first study showing improving stream morphology in Yellowstone’s northern elk range, or anywhere else in the U.S. as it relates to the return of a large predator.”

With improvements in stream channels and to riparian vegetation, beavers are returning to parts of the study area, their dam building adding its own unique set of ecosystem enhancements.

“They reinforce and reconnect streams with floodplains in a way that only beavers do,” Beschta said. “They irrigate riparian areas in ways that won’t occur otherwise, and that’s not only good news for riparian vegetation but also a host of wildlife species, such as songbirds, waterfowl, amphibians, fish and others.”