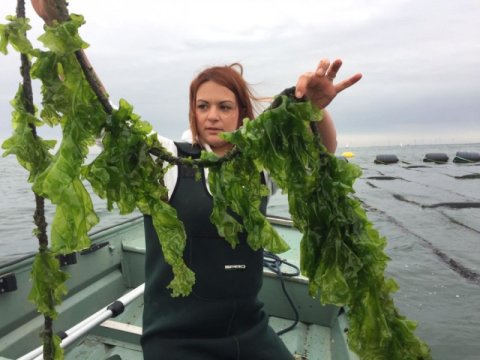 Sea lettuce, a fast-growing seaweed that spawns massive “green tides,” is a prolific thief, according to research that for the first time sequenced the genome of a green seaweed.

An international team including Rutgers scientists found 13 cases where the sea lettuce Ulva mutabilis stole genes from bacteria. Remarkably, this ubiquitous seaweed expanded more than half of the pilfered genes — creating so-called “gene families” — and used some of them to adapt to stresses such as excessive light, high salinity and dehydration to become a dominant intertidal seaweed, according to study co-author Debashish Bhattacharya, distinguished professor at Rutgers University-New Brunswick. Ulva also lives with bacteria and relies on them to gain its multicellular form. Both stolen genes and intact bacteria that live in symbiosis with Ulva play key roles in the seaweed’s success.

Ulva‘s rapid growth is not all negative. Indeed, it can be exploited to produce biofuels, generate protein for animal feed, remove excessive nutrients in aquaculture and serve as a seaweed crop, according to a study published online in Current Biology.

“Ulva provides insights into how evolution acts on genomes to modify the biology of organisms,” said Bhattacharya, who works in the Department of Biochemistry and Microbiology in the School of Environmental and Biological Sciences. “Learning these rules will be crucial to understanding what traits define winners and losers under climate change, allowing us to better predict future trends among seaweed, algae and other life at the base of the food chain.”

Fatima Foflonker, a post-doctoral researcher, and Bhattacharya were part of an international team that analyzed Ulva‘s recently determined genome sequence. They studied the sea lettuce to gain insights into the growth and reproduction of multicellular green algae. Seaweeds evolved independently from land plants, and the research found that the mechanisms underlying their growth and development are distinct.

The Ulva genome offers new opportunities to understand coastal and marine ecosystems and the evolution of green seaweeds. Comparison of Ulva species that bloom and don’t bloom may boost understanding of the molecular mechanisms underpinning growth and reproduction in response to environmental conditions, the study says.