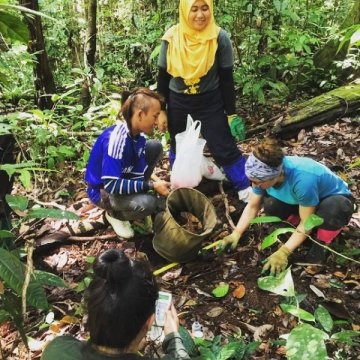 Termites are commonly regarded as one of the most destructive insect pests, but in fact only 4% of the 3,000 termite species known globally are pests. Its unknown side was recently revealed by a major new study published in the journal Science — the collaborative research co-led by Dr Louise Ashton of the University of Hong Kong, with researchers from the University of Liverpool and the Natural History Museum, London, has discovered that termites actually help mitigate against the effects of drought in tropical rain forests.

Termites are highly abundant in tropical ecosystems. They are one of the few living creatures that can break down cellulose found in plant material. They create temporary above-ground protective structures called “sheeting” which allows them to move about in the forest even during drought conditions. They are thought to be important for soil processes including decomposing and soil moisture, however the roles of termites in these processes in tropical rainforest have not been fully quantified using real-world experiments. This is because it is quite difficult to suppress the activity of termites. The research team developed novel suppression techniques using toilet paper rolls and regular monitoring of termite communities to understand what termites are doing in tropical rainforests.

This large-scale experiment was established at the beginning of the 2015 El Nino drought and the team carried out the same experiments in 2016 during non-drought conditions. This allowed them to not only investigate the roles of termites in tropical rainforests, but also how drought influences termite activity and the knock-on effects in the ecosystem.

Working in a tropical rainforest in Malaysian Borneo, four 80 x 80 m termite suppression plots and four control plots in Maliau Basin Conversation Area were set up. The core team of researchers included Dr Louise Ashton from the University of Hong Kong, Dr Hannah Griffiths and Dr Kate Parr from the University of Liverpool, Dr Paul Eggleton from the Natural History Museum, London and Dr Theo Evans from the University of Western Australia. The researchers worked with a team of Malaysian research assistants to carry out regular field expeditions, which were around 3-month long. Over the course of the project they spent around 9 months in the field.

Joint lead author, Dr Louise Ashton from the University of Hong Kong and Natural History Museum said “Termites confer important ecosystem services, not only in pristine tropical rainforest, but in disturbed or even agricultural ecosystems, if termite abundance is reduced with disturbance, these habitats could be particularly sensitive to drought.”

Another lead author, Dr Hannah Griffiths from School of Environmental Sciences of the University of Liverpool said: “The results of our study are important because our study shows that intact biological communities can act as a kind of ecological insurance by keeping ecosystems functioning in times of environmental stress.”

Professor Kate Parr, also with Liverpool’s School of Environmental Sciences, said: “Whilst there has been some work exploring how severe drought affects plants in tropical rainforests, our study shows for the first time that having termites helps protect forest from the effects of drought. Termites might only be small but collectively their presence can help reduce the effects of climate change in tropical systems.”

Senior author, Dr Paul Eggleton from the Natural History Museum said “People are just realising how important invertebrates are ecologically, particularly social insects. Termites and ants may well be the ‘little things that rule the world’.”

“In most people’s minds, termites are a pest that can damage homes and crops. Here, however, we have shown that termites are essential in buffering the negative effects of drought in tropical rainforest. Given that droughts are predicted to become more frequent and severe with further climate change, termites may be beneficial for maintaining decomposition, soil moisture, nutrients and seedling survival during droughts, and this may also be true in other ecosystems including agricultural systems. We would like to carry out research on the benefits of termites in such systems in the future.” Dr Ashton said.

Materials provided by The University of Hong Kong. Note: Content may be edited for style and length.