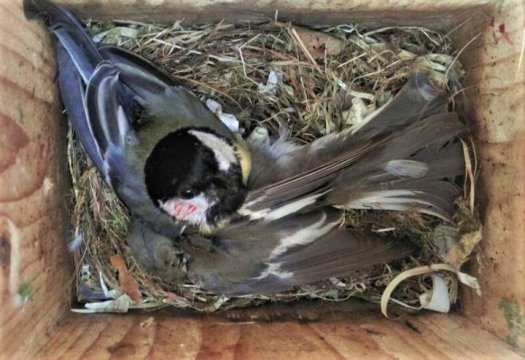 Researchers have found yet another way in which climate change has been detrimental to migrating birds. As European winters have become warmer, pied flycatchers traveling from Africa over long distances to reach breeding grounds in the Netherlands are arriving to find that resident great tits have already claimed nesting sites for the season. As a result, the number of flycatchers killed in great tit nests has risen dramatically. The work appears January 10 in the journal Current Biology.

“When pied flycatchers and great tits are more synchronous in their timing, this leads to a higher level of conflict over nesting sites,” says Jelmer Samplonius, who did the work at the University of Groningen, the Netherlands, and is now at the University of Edinburgh, UK.

Samplonius’s team got interested in the dynamics between pied flycatchers and great tits in part because both species rely on a short burst of food resources — caterpillars — to raise their young. When the birds’ timing is well matched with the caterpillar peak, they are more successful in raising their offspring.

Given the reliance on the same food and nesting resources, it was clear the two species interacted quite a bit. Pied flycatchers were known for trying to take over great tit nests. They also eavesdropped on resident great tits to gain information the long-distance migrants otherwise lack about local conditions.

After years of careful monitoring, Samplonius says, “it was hard not to notice” that many flycatchers were dying in great tit nests. In other years, “virtually none” met that same fate. Could synchrony between the two competitor species explain the variation?

To find out, the researchers studied pied flycatcher fatalities in great tit nest boxes in a Dutch population between 2007 and 2016. They found that, in some years, great tits killed almost one in ten flycatcher males.

Climate change has differentially affected the schedules of these interspecific competitors, leading to greater synchrony, the evidence shows. Great tits have been able to respond to warmer winters by shifting the breeding season earlier in a way the flycatchers can’t, Samplonius explains. Because flycatchers spend much of the year in Africa, they aren’t able to adjust to changing conditions in Europe in the same way.

The researchers also found that great tits occupy more nest boxes after mild winters. Not surprisingly, fatal competition is higher in years when and in areas where there are more breeding tits.

Interestingly, they report no population consequences of fatal competition, suggesting that mortality predominantly affected “surplus” males. The males that most often died had arrived late and may have been unlikely to mate regardless.

While the findings suggest that pied flycatchers are buffered against the detrimental effects of competition with great tits, the new findings don’t bode well for their future. “If buffers are diminished, population consequences of interspecific competition may become [more] apparent, especially after warm winters that are benign to resident species,” the researchers write.

Samplonius says the findings highlight the importance of long-term research for understanding the many and complex effects of a changing climate. “As a scientific community, we have to continue doing and supporting long-term research as climate change continues at increasing rates,” he says.