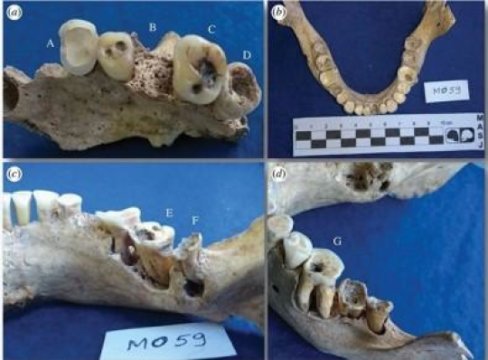 Shell middens are archeological features consisting mainly of the remains of marine animals thrown away near settlements over hundreds or thousands of years. They are the debris of human activity. In Brazil, they are known by the Tupi word sambaqui.

The sambaquis were left by people who lived between 8,000 and 1,000 years ago in coastal Atlantic Forest areas, traditionally considered peripheral to South America’s first food production centers in the Andes and the Amazon.

A new study, however, presents strong evidence that sambaqui societies were not ordinary hunter-gatherers. Analysis of their middens shows that they cultivated or at least managed edible plants and had a rich diet with a substantial proportion of carbohydrates. Fapesp — São Paulo Research Foundation- FAPESP has supported the study.

Findings from the study have recently been published in Royal Society Open Science. It was conducted by researchers from Brazil and the United Kingdom using data collected at the Morro do Ouro and Rio Comprido sambaquis in Babitonga Bay near Joinville, Santa Catarina State.

“The significant levels of consumption of high-carbohydrate foods evidenced by these two sambaquis suggests the communities had a mixed subsistence economy that combined fishing and the collection of seafood with some form of plant cultivation,” said Luis Nicanor Pezo-Lanfranco, a bioarcheologist at the University of São Paulo’s Bioscience Institute (IB-USP), first author of the article and a FAPESP grantee.

Pezo-Lanfranco conducted the study at IB-USP’s Biological Anthropology Laboratory, led by Professor Sabine Eggers, in partnership with archeologists at the University of York (UK) and Joinville’s Sambaqui Museum.

According to the traditional archeological view of prehistory in South America, the hunter-gatherers who left the shell middens maintained themselves mainly by foraging marine resources. This idea began to be contested in the 1980s when evidence was found that the sambaqui societies had a far more diversified economy.

The high frequency of sambaquis on the southern coast of what is now Brazil and the large volume of some of these shell middens, which also contain hundreds of human burials, are considered evidence of high population density, monumental architecture, and social complexity during the Middle to Late Holocene.

Dental caries on the teeth of buried skeletons, interpreted as evidence of a high-carbohydrate diet, are among the reasons for concluding that these communities had a more diversified economy and diet than previously believed.

The new study was based on oral pathology and stable isotope analyses performed directly on the skeletons. The analyses revealed unexpectedly high consumption of plant resources, i.e., carbohydrates, by the Morro do Ouro sambaqui people on the northern coast of Santa Catarina in the Middle Holocene (8,000-4,000 years ago).

The northern coast of Santa Catarina has the largest number of sambaquis in Brazil. Hundreds of shell mounds are scattered around Babitonga Bay.

“We analyzed the oral health and stable isotopes of human remains buried in the Morro do Ouro and Rio Comprido sambaquis to investigate the dietary habits of these communities during the Middle and Late Holocene,” Pezo-Lanfranco said.

Finds made at Morro do Ouro have contributed significantly to the discussion of population density, health and disease, and cultural and dietary variability in Atlantic Forest coastal communities during the Middle Holocene.

Archeological digs conducted there in the 1980s brought to light large amounts of remains of terrestrial and marine animals, artifacts, domestic structures, and human burials.

According to Pezo-Lanfranco, 116 burials were excavated by several archeological expeditions between 1960 and 1984. Carbon dating of bone collagen for this study showed that the site was occupied between 4,800 and 4,100 years ago. An analysis of minute dental calculus traces from the site performed in 2010 by Verônica Wesolowski, a researcher at the University of São Paulo’s Museum of Archeology and Ethnology (MAE-USP), had already identified grains of starch compatible with sweet potato, yam, and coconut.

Morphological analysis performed for the study included the determination of sex and age as well as oral pathologies in 70 individuals, 42 from Morro do Ouro (MO) and 28 from Rio Comprido (16 RC1 and 12 RC2). Stable carbon and nitrogen isotopes from 36 individuals were analyzed, 20 from MO and 16 from RC (nine RC1 and seven RC2).

Using 11 oral health markers, a total of 1,826 alveoli and 1,345 teeth from these 70 individuals were examined. Most of the skeletons analyzed were found to be male and aged 20-49 on average at the time of death.

“The frequency of dental caries ranged from 7.6% to 13.2% of the samples. This was more than expected for groups of hunter-gatherer-fishers and more compatible with the pattern found for the first farmers of the Late Holocene in other regions, such as the Andes,” Pezo-Lanfranco said.

Analysis of teeth from Late Holocene hunter-gatherers found in Patagonia, for example, showed caries frequencies ranging from 3.3% to 5.19%, while samples from more recent sedentary populations in Patagonia displayed a frequency of 10.17%.

Caries types varied considerably across the two sambaqui sites, but statistically significant differences were observed only in cervical (extraocclusal) lesions.

Carious lesions have been associated with diets rich in fermentable carbohydrates and sugar. The frequency of extraocclusal caries and cavities on smooth tooth surfaces increases when diets are rich in cariogenic foods.

“It’s probable, therefore, that the Morro do Ouro people had a more cariogenic and refined diet than the Rio Comprido 2 people, quite possibly because they cooked their food, for example,” Pezo-Lanfranco said.

Dietary estimates based on stable isotopes from teeth and bone showed that the main protein source was fish, ranging from a low of 33% in people from MO to 87%-90% in RC2.

Plants accounted for the largest share of calorie intake in MO (48%), followed by fish (44%) and hunted terrestrial mammals (8%).

Bone collagen data from RC1 showed fish to be the main source of calories (48%), followed by plants (44%) and terrestrial mammals (7%).

“On the other hand, the higher frequency of deep and extraocclusal caries in RC2, and particularly in MO, points to widespread consumption of cariogenic and processed carbohydrate from roasted or boiled plants. The evidence from RC and MO suggests the existence of some kind of plant cultivation, albeit incipient.”

Cervical caries, the most frequent type of extraocclusal caries in individuals from MO (29%), are associated with the frequent consumption of sucrose and solid fermentable starch, high levels of salivary lactobacilli, and the deposition of cervical calculus with gingival recession (receding gums).

“Cervical caries frequencies of around 16% have been reported for Pleistocene hunter-gatherers in northern Africa and interpreted as the first signs of the systematic harvesting and storing of high-carbohydrate wild plant food,” Pezo-Lanfranco said.

In Andean agriculturalists, cervical caries are attributed to the consumption of fermented beverages made from cassava, corn, and other starchy foods. Previous studies have shown that sucrose, starch with sucrose, fructose and dextrose in descending order stimulate the production of smooth-surface and cervical caries, while high amounts of maltose and starch tend to lead more to cervical caries.

“So the MO diet was probably richer in cariogenic carbohydrate than the RC diet, and comparable to the diets of some agricultural peoples in antiquity,” Pezo-Lanfranco said.

The dental wear index in MO and RC was lower than for several sambaqui communities studied elsewhere. The RC2 diet seems to have been more abrasive than the MO diet. Stone vessels and grindstones found at MO may have been used to make flour. Microscope analysis of these implements is pending.

“This study puts the Neotropics on the map of the world’s food production centers in antiquity. The Atlantic Forest coast has mostly been peripheral to this narrative despite its unique biodiversity and the archeological records of dense human occupation since the Middle Holocene. The new study challenges this traditional view,” Pezo-Lanfranco said. “We assembled strongly convincing evidence for high-carbohydrate dietary habits among hunter-gatherers in the Joinville region some 4,500 years ago. Confirmation that they had cultivar production systems and how far they had progressed with domestication of the plant species concerned awaits further research.”