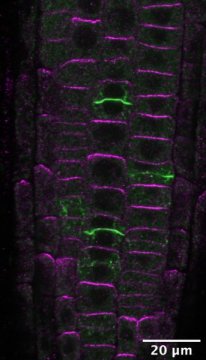 Knowing which way is up and which way is down is important for all living beings. For plants, which grow roots into the soil and flowers above ground, getting this polarization wrong would cause a whole host of problems. In plants, polarization of the entire organism depends on every single cell being polarized. Cell division, however, disrupts polarization. How polarity is reestablished was unknown — until now. Researchers at the Institute of Science and Technology Austria (IST Austria) have solved one piece of the puzzle: They found that plant cells inherit the knowledge of where is up and where’s down from their mother cell. The study led by Jiří Friml, Professor at the Institute of Science and Technology Austria (IST Austria), with first author Matouš Glanc, PhD student in the Friml group, and Matyáš Fendrych, previously a postdoc in the Friml group and now Assistant Professor at Charles University in Prague, is published today in Nature Plants.

What they found was surprising, says first author Matouš Glanc. “We thought that cells would need to communicate with their neighbors to correctly re-establish polarity. So we first looked for a signal that would be sent between cells. But we found no such thing. Instead, we found that polarity is communicated by the mother cell.” Exactly how mother cells ‘tell’ their daughter cells where up and down are is not yet known, Glanc adds. “We know that polarity information is not conveyed by signaling from neighbors, but is inherited from the mother cell — we are still trying to understand how.”

The researchers also found that endocytosis, which removes proteins from the cell surface, is crucial for this polarity re-establishment. Previously, it was thought that PIN auxin transporters that end up on the “wrong” cell side after division get removed by endocytosis and shuttled to the correct side. In the paper, the researchers show that instead of being ferried around, the wrongly placed transporters are endocytosed and destroyed. New PIN transporters are made and inserted in the correct side of the cell membrane.

A group of kinases, PINOID and its homologues WAG1 and WAG2, modify PIN transporters through a chemical reaction called phosphorylation, and are also crucial for determining their polarity. Plants in which all three kinases are no longer functional are unable to re-establish polarity after cell division. In these mutants, we see what happens when plants get polarity wrong: the roots don’t grow down into the soil along gravity, but wave and turn instead.

While the study has provided some crucial answers as to how polarity is re-established, more questions remain open, says Glanc. “We have identified endocytosis und phosphorylation as key steps in polarity establishment, and we have shown that polarity is inherited from the mother. But we still need to find the nature of the inherited information. It is something inherent to the cells, but what protein, lipid or sugar is involved remains to be seen.”