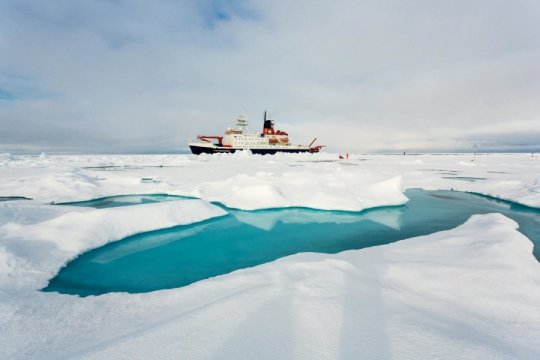 In an extensive and rigorous study of animal life on the Central Arctic Ocean floor, researchers have shown that water depth and food availability influence the species composition, density, and biomass of benthic communities, according to a study published October 17, 2018 in the open-access journal PLOS ONE. The study, led by a team including Antje Boetius of the Max Planck Institute for Marine Microbiology, Bremen, Germany, also confirmed for the first time that species diversity on the Arctic floor display a similar depth-related pattern to that seen in more temperate waters.

Because of the long winter and permanent ice cover, life on the floor of the Central Arctic Ocean is sparser than in temperate oceans, but key characteristics of these benthic communities have not been well characterized. To address this problem, Boetius and colleagues combined data from previous ocean floor surveys with new data, including from 2012, the year of the most severe ice retreat over the Arctic Ocean in recent history.

They found that, as predicted, total biomass fell as depth increased, consistent with a food input for animal life, and the rate of decline with depth was greater than in temperate oceans. Five different community types were identified, which differed in species composition and were dependent on depth, ranging from the shallow waters of the continental shelf, to the increasing depths of the continental slope, to the abyssal plain more than four kilometers deep. As seen in temperate waters, species diversity rose and then fell as depth increased.

In this remote ocean, insufficient data are available to track diversity or biomass changes over time, but the authors hope this study will provide a baseline for answering critical questions in the future about the effects of climate change on vulnerable Arctic waters.