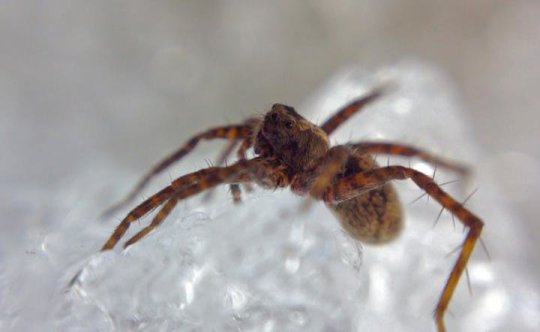 Wolf spiders are so abundant that they outweigh real wolves in the Alaskan Arctic by several orders of magnitude. Their sheer numbers make them one of the important predators on the tundra. They may also be important in buffering some effects of climate change.

Under warming conditions, arctic wolf spiders’ tastes in prey might be changing, according to new research from Washington University in St. Louis, initiating a new cascade of food web interactions that could potentially alleviate some impacts of global warming.

The surprising result of this chain reaction is described in a new paper by Amanda Koltz, a postdoctoral researcher in biology in Arts & Sciences, published July 23 in the Proceedings of National Academy of Sciences.

The ways in which animals interact with each other will be affected by climate change, scientists generally agree. But few studies have explored the larger picture of how these changes will alter not just individual species, but concurrently impact all of the biological and physical interactions in a given environment.

“We often think about how warmer temperatures might strengthen or weaken interactions between predators and their prey,” Koltz said. “But in this case we show that when warming alters those interactions, it can also lead to changes in ecosystem-level processes like decomposition rates.”

Koltz and her team study wolf spiders. They are less than half an inch long, but in a warming future, they might be both larger and more prolific (so don’t say we didn’t warn you).

Wolf spiders don’t make webs. This type of spider hunts on the ground and can eat almost anything smaller in size, from plant-eating bugs to other predators.

But they really love to eat Collembola — the small arthropods commonly called springtails. It’s this spider snack that connects them to the belowground environment. Springtails eat both decaying plants and fungus. And, in wet tundra, the fungus in the ground largely controls how quickly dead plant matter is decomposed and its nutrients released into the soil and air.

Arctic wolf spiders are thus said to have an “indirect” effect on decomposition. The spiders eat animals (springtails) that eat fungus; if more fungus-eaters get eaten, then fungus grows unchecked. When there is a lot more fungal activity, there is faster decomposition.

Decomposition is usually positive for plants, in that it releases more nutrients to the soil. Some of these nutrients, such as nitrogen, are sought-after fertilizers that enhance plant productivity. But decomposition is a double-edged sword for the environment. As microbes eat dead plants, they also respire carbon dioxide and methane — powerful greenhouse gases.

Between one-third to one-half of the global pool of soil organic carbon is frozen in Arctic permafrost, currently locked away from decomposers but vulnerable to warming.

To test the effects of warming on the spider/fungus-eater/soil system, Koltz and her team installed a series of experimental enclosures in an area of arctic tundra in Northern Alaska over two summer seasons. These mini-ecosystems were 1.5 meters in diameter and separated all of the regular tundra inhabitants — including belowground animals and fungus — from their surroundings in a space where temperature and densities of spiders could be manipulated.

At the end of the study period, the scientists surveyed everything inside the enclosures. They counted springtails and mites, measured microbial biomass (fungus and bacteria), and tallied the other tiny animals that could either eat the springtails themselves or serve as alternative food sources for the wolf spiders.

What they discovered was surprising. At ambient temperatures, there were fewer springtails left in the high-spider-density plots, and decomposition of leaf litter had happened faster. This was expected since wolf spiders love to eat springtails. But in the warmed plots with high spider densities, the researchers found significantly more of the springtail prey, and less evidence of decomposition of the leaf litter in the soil.

What’s going on here? The researchers believe that under warming conditions, the wolf spiders are developing a taste for different prey. Instead of springtails, they could be eating more of the intermediate predators, like smaller spiders.

That’s good news for springtails — and maybe for the climate, too.

In a warming future, if wolf spiders eat fewer springtails, such that the springtails are able to eat more microbes, then there may be less decomposition — and less carbon released from the permafrost.

“The way that organisms interact with one another can influence important ecosystem functions like how much carbon stays fixed by plants, how quickly decomposition happens, and how nutrients are cycled within that ecosystem,” Koltz said. “Controls on nutrient cycling in the Arctic are very important for us to understand, because this region plays a disproportionately large role in the global carbon cycle.

“Spiders are not going to save us from climate change, but we found that decomposition is slower under warming when there are more wolf spiders present,” Koltz added. “This suggests that under some circumstances, they could be alleviating some of the effects of warming on carbon losses from the tundra. It’s a good thing.”