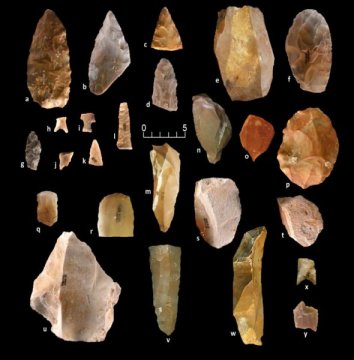 For decades, researchers believed the Western Hemisphere was settled by humans roughly 13,500 years ago, a theory based largely upon the widespread distribution of Clovis artifacts dated to that time. Clovis artifacts are distinctive prehistoric stone tools so named because they were initially found near Clovis, New Mexico, in the 1920s but have since been identified throughout North and South America.

In recent years, though, archaeological evidence has increasingly called into question the idea of “Clovis First.” Now, a study published by a team including DRI’s Kathleen Rodrigues, Ph.D. student, and Amanda Keen-Zebert, Ph.D., associate research professor, has dated a significant assemblage of stone artifacts to 16-20,000 years of age, pushing back the timeline of the first human inhabitants of North America before Clovis by at least 2,500 years.

“These projectile points are unique. We haven’t found anything else like them,” said Tom Williams, Ph.D., Postdoctoral Research Associate in the Department of Anthropology at Texas State University and lead author of the study. “Combine that with the ages and the fact that it underlies a Clovis component, and the Gault site provides a fantastic opportunity to study the earliest human occupants in the Americas.”

The research team identified the artifacts at the Gault Site in Central Texas, an extensive archaeological site with evidence of continuous human occupation. The presence of Clovis technology at the site is well-documented, but excavations below the deposits containing Clovis artifacts revealed well-stratified sediments containing artifacts distinctly different from Clovis.

To determine the ages of these artifacts, Rodrigues, Keen-Zebert, and colleagues used a process called optically simulated luminescence (OSL) dating to the ages of the surrounding sedimentary material. In OSL, researchers expose minerals that have long been buried under sediment layers to light or heat, which causes the minerals to release trapped potassium, uranium, and thorium electrons that have accumulated over time due to ambient, naturally occurring radiation. When the trapped electrons are released, they emit light which can be measured to determine the amount of time that has elapsed since the materials were last exposed to heat or sunlight.

“The fluvial nature of the sediments deposited at the Gault Site have created a poor environment for preservation of organic materials, so radiocarbon dating has not been a useful technique to apply in this region,” said Kathleen Rodrigues, graduate research assistant in DRI’s Division of Earth and Ecosystem Sciences. “This made luminescence dating a natural choice for dating the archaeological materials here. We are really pleased with the quality of the results that we have achieved.”

Materials provided by Desert Research Institute. Note: Content may be edited for style and length.