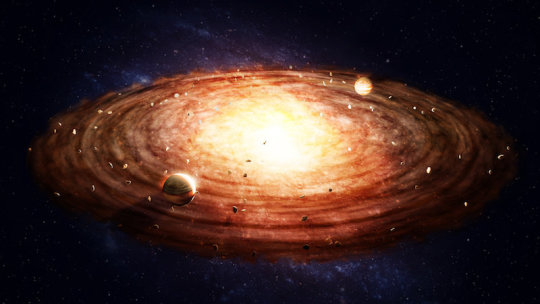 CI Tau b is a paradoxical planet, but new research about its mass, brightness and the carbon monoxide in its atmosphere is starting to answer questions about how a planet so large could have formed around a star that’s only 2 million years old.

At today’s meeting of the American Astronomical Society, astronomers Christopher Johns-Krull of Rice University and Lisa Prato of Lowell Observatory presented findings from a four-year near-infrared spectroscopic analysis of light from CI Tau b, a close-orbiting giant exoplanet, or “hot Jupiter,” in a nine-day orbit around its parent star about 450 light years from Earth in the constellation Taurus.

“The exciting thing is that we are able to detect light directly from the planet, and it’s the first time that’s been done for a close-in planet around a star this young,” said Johns-Krull, professor of physics and astronomy and co-author of a study that’s slated for publication in AAS’s Astrophysical Journal Letters. “The most valuable way to learn how planets form is to study planets, like CI Tau b, that are either still forming or have just formed.”

For decades, most astronomers believed giant planets like Jupiter and Saturn formed far from their stars over periods of 10 million years or more. But the discovery of dozens of “hot Jupiters” led to new theoretical models that describe how such planets might form.

Because each atomic element and molecule in a star emits light from a unique set of wavelengths, astronomers can look for specific signatures, or spectral lines, to see if an element is present in a distant star or planets. Spectral lines can also reveal the temperature and density of a star and how fast it’s moving.

READ  Research: Did mosasaurs do the breast stroke? --

That’s because the brightness of a star or planet depends upon both its size and temperature.

“Direct observational evidence of the mass and brightness of CI Tau b is particularly useful because we also know it orbits a very young star,” said Rice Ph.D. student Laura Flagg, the lead author of the forthcoming study. “Most of the hot Jupiters we’ve found are orbiting middle-aged stars. CI Tau’s age gives a tight constraint for putting models to the test: Can they produce a planet this bright and this massive in so little time?”

Flagg’s analysis of spectral lines from carbon monoxide showed that CI Tau b has a mass of 11.6 Jupiters and is about 134 times fainter than its parent star. Prato said that provides strong evidence that it formed via a “hot start,” a theoretical model that describes how gravitational instabilities could form giant planets more rapidly than traditional models.

READ  Atmospheric: What COVID-19 can teach tourism about the climate crisis

Prato said the new study provides a unique empirical yardstick by which to measure competing theories.

IGRINS, which was designed by study co-author Daniel Jaffe of the University of Texas at Austin, uses a silicon-based diffraction grating to improve both the resolution and number of near-infrared spectral bands that can be observed from distant objects like CI Tau b and its parent star. IGRINS was moved from McDonald to Lowell midway through the study.

Additional co-authors include Larissa Nofi and Joe Llama of Lowell Observatory, and Kendall Sullivan and Gregory Mace of both UT Austin and its McDonald Observatory. The research was supported by Rice, the National Science Foundation (AST-1461918, AST-1229522 and AST-1702267), UT Austin, the Korea Astronomy and Space Science Institute, NASA (18-XRP18_2-0138) and Lowell Observatory.