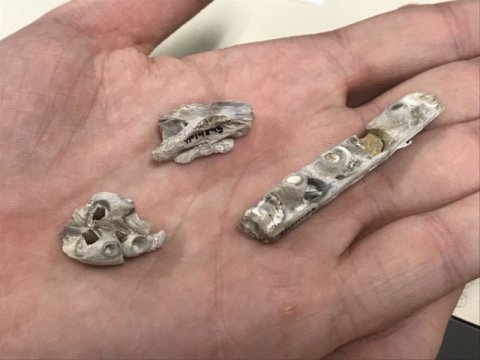 The smallest Tylosaurus mosasaur fossil ever found has been revealed in a new study in the Journal of Vertebrate Paleontology and surprisingly it lacks a trademark feature of the species.

The fossil, likely to be that of a newborn, does not have the recognizable long snout typically seen in the species. The lack of this snout initially perplexed researchers, who struggled to identify which group of mosasaurs it belonged to.

After examining and comparing the fossil to young specimens of closely-related species, such as T. nepaeolicus and T. proriger which already had identifiable noses, researchers finally deemed it to be a young Tylosaurus.

Lead author Professor Takuya Konishi, of the Department of Biological Sciences at the University of Cincinnati said, “Having looked at the specimen in 2004 for the first time myself, it too took me nearly 10 years to think out of that box and realize what it really was — a baby Tylosaurus yet to develop such a snout.

For those 10 years or so, I had believed too that this was a neonate of Platecarpus, a medium-sized (5-6m) and short-snouted mosasaur, not Tylosaurus, a giant (up to 13m) mosasaur with a significantly protruding snout.”

The lack of snout in the baby specimen found suggests to researchers that the development of this feature happens extremely quickly, between birth and juvenile stage — something that previous studies on the species had failed to notice.

Konishi further commented, “Yet again, we were challenged to fill our knowledge gap by testing our preconceived notion, which in this case was that Tylosaurus must have a pointy snout, a so-called ‘common knowledge.’

As individual development and evolutionary history are generally linked, the new revelation hints at the possibility that Tylosaurus adults from much older rock units may have been similarly short-snouted, something we can test with future discoveries.”

The fragments found include a partial snout with teeth and tooth bases, partial braincase, and a section of upper jaw with tooth bases. From this, they can estimate the entire baby skull to have been around 30cm (1ft) in total.

Tylosaurus belong to one of the largest-known groups of mosasaurs, up to 13m long, the front 1.8 m of that body being its head. The baby, therefore, was about 1/6 the size of such an adult.

Michael J. Everhart, a Kansas native and a special curator of paleontology at the Sternberg Museum of Natural History, Hays, Kansas, found the tiny specimens in 1991 in the lower Santonian portion of the Niobrara Chalk, in Kansas, which are now housed at the museum. The paper was co-authored by Paulina Jiménez-Huidobro and Michael W. Caldwell of the University of Alberta, Canada.