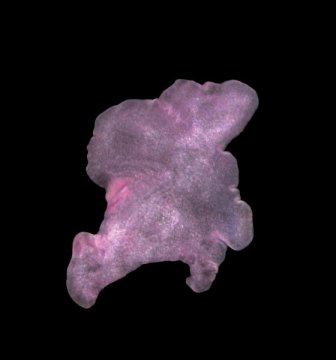 Almost eight years ago, Stanford University bioengineer Manu Prakash was looking for a way to watch every cell in an adult living, behaving animal in elaborate detail. He searched the catalog of life and happened upon the simple marine animal Trichoplax adhaerens — or Tplax, as Prakash has come to call it.

This ultra-flat animal lacks both muscles and neurons, but still moves and navigates through its watery world. The Prakash lab found Tplax manages this feat through surprisingly fast contractions in its two skin-like layers — contractions strong enough that they would ordinarily rip apart such seemingly delicate tissues. In their first paper based on years-long study of this organism, published Oct. 11 in Proceedings of the National Academy of Sciences, the researchers describe the ultra-fast contractions and propose a hypothesis for how this creature withstands internal and external forces in a marine environment.

The findings could help inform not only how complex animals evolved, but also the creation of an advanced material, called an active solid, that could dramatically and quickly modulate its own physical properties.

“Much of the rules of biology that we read in textbooks have been, so far, dictated by a few sets of ‘model’ organisms,” said Prakash, who is an associate professor of bioengineering and senior author of the paper. “If we intend to be the generation that will unravel laws of biology, it’s extremely important to understand and appreciate the diversity of what has evolved on our planet and think much more holistically about what is actually possible in biological systems.”

In the early days of studying Tplax, the creatures would move repeatedly out of view under the microscope. But over time, the Prakash lab researchers learned to track and quantify the animals’ every cellular squeeze and squirm. Prakash remembers when their efforts first began to pay off.

“There was literally a day where, for the first time, I had some of the stains that label Tplax cells working, and under the microscope we saw an explosion of cellular contractions,” said Prakash. “It looked like fireworks under a microscope and that was the moment that told us there is something very special about this animal and we needed to understand it.”

Those fireworks were Tplax’s quick contractions, which occur in its flat layer of what are known as epithelial cells — essentially the equivalent of skin. Although these kinds of cells have long been known to contract, in embryos for example, Tplax’s contractions were 10 times faster than any epithelial cell contraction ever reported. This would tear apart the network of cells in any other biological tissue as thin as this animal, which is only about 25 microns thick, or one-quarter the thickness of a sheet of paper.

The researchers think the tissue’s strength lies in the fact that while some cells contract strongly, others soften — a hypothesis they call “active cohesion.” In many tissues, contracting in reaction to a force would cause a tear and relaxing would cause the animal to be at the mercy of that force. By doing both simultaneously and in a coordinated manner, the cells involved in Tplax’s active cohesion distribute the stress, letting the animal remain whole and in control.

The discovery of an ultra-fast contractile epithelial cell poses new questions for the role of epithelial contractions in coordinating cellular activity across the tissue.

“We look at this simple creature and we see it make decisions and move and hunt,” said Shahaf Armon, a postdoctoral fellow in the Prakash lab who is lead author of the paper. “It’s a huge evolutionary question, how single cells merged to become multicellular organisms and how such a minimal tissue made of identical cells is able to then perform complex behaviors.”

Now, the researchers are exploring what other organisms might use active cohesion and are creating artificial material that replicates this mechanism to build an active solid. Key to the speed of these contractions is the unusual geometry of Tplax’s epithelial structure: T-shaped cells with a very thin top sheet and a hanging nucleus at the bottom that line up side-by-side like a single layer of bricks. That geometry, which they share with sponges, could inform the development of new materials.

Working with laboratory lineages and animals they caught themselves in Monterey, the group grew Tplax in a wide variety of sizes and shapes, creating animals that are hundreds to millions of cells. This variation in size provides a powerful window into understanding how cellular coordination varies as the number of cells increase or decrease.

“Tplax are really mysterious beasts,” said Matthew Bull, a graduate student in the Prakash lab and co-author of the paper, “but we use that to our advantage to find where our understanding of what it means to be part of the animal kingdom bends and then breaks.”