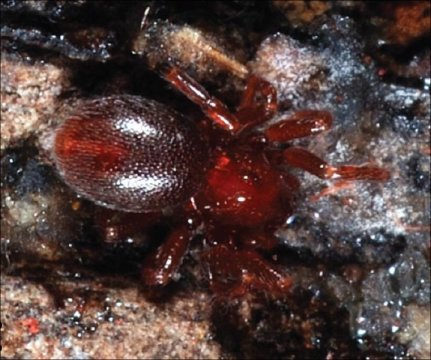 The goblins Bom, Snooky and Tumpy and the brownies Chippy, Snippy and Tiggy made their way from the pages of: “The Goblins Looking-Glass” (1947), “Billy’s Little Boats” (1971) and “The Firework Goblins” (1971) to the scientific literature in a quest to shed light on the remarkable biodiversity of the island country of Sri Lanka, Indian Ocean.

As a result of their own adventure, which included sifting through the leaf litter of the local forests, scientists Prof. Suresh P. Benjamin and Ms. Sasanka Ranasinghe of the National Institute of Fundamental Studies, Sri Lanka, described a total of nine goblin spider species in six genera as new to science. Two of these genera are reported for the very first time from outside Australia.

Their paper is published in the open access journal Evolutionary Systematics.

With a total of 45 species in 13 genera, the goblin spider fauna in Sri Lanka — a country taking up merely 65,610 km2 — is already remarkably abundant. Moreover, apart from their diversity, these spiders amaze with their extreme endemism. While some of the six-eyed goblins can only be found at a few sites, other species can be seen nowhere outside a single forest patch.

“Being short-range endemics with very restricted distributions, these species may prove to be very important when it comes to monitoring the effects of climate change and other threats for the forest habitats in Sri Lanka,” explain the researchers.

In European folklore, goblins and brownies are known as closely related small and often mischievous fairy-like creatures, which live in human homes and even do chores while the family is asleep, since they avoid being seen. In exchange, they expect from their ‘hosts’ to leave food for them.

Similarly, at size of a few millimetres, goblin spiders are extremely tough to notice on the forest floors they call home. Further, taking into consideration the anthropogenic factors affecting their habitat, the arachnids also turn out to be heavily dependent on humans.