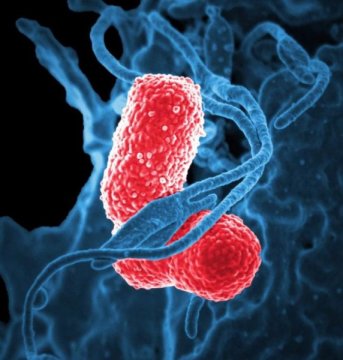 New computational simulations suggest that the effects of antibiotics on a bacterial community depend on whether neighboring species have competitive or cooperative relationships, as well as their spatial arrangement. Sylvie Estrela of Yale University and Sam Brown of the Georgia Institute of Technology present these findings in PLOS Computational Biology.

Bacteria living in close proximity may have competitive interactions, such as fighting for limited resources, or cooperative (mutualistic) interactions, such as one species producing a product that serves as food for the other. Previous research has investigated how competition impacts a bacterial community’s response to antibiotics, but less is known about the potential role of mutualistic relationships.

To address this question, Estrela and Brown took a computational approach. They modified an existing model of bacterial growth so that it could be used to predict how competitive or mutualistic interactions between antibiotic-resistant and antibiotic-sensitive species might influence a two-species community’s response to antibiotic treatment.

The simulations showed that, between two competing species, antibiotic treatment suppressed the sensitive species while favoring growth of the resistant species. However, in the context of a mutualistic relationship, hitting the sensitive species with antibiotics also suppressed the resistant species, due to their inter-dependency.

The researchers also found that the spatial arrangement of individual bacterial cells influenced their response to antibiotics. Some resistant species deploy detoxification strategies against antibiotics, and this can result in cross-protection of nearby sensitive cells. The simulation showed that such cross-protection is more effective among a mutualistic pair of sensitive and resistant species because mutualists tend to mix as they grow, while competing or non-interacting species tend to segregate.

“Too little is known about the ecology of microbial infections, especially what pathogens do and how they interact with their host’s resident microbes,” Estrela says. “We hope our results will help draw attention to the fact that the community ecological and spatial context in which antibiotics are applied matters for treatment success.”

Next, the researchers will test their simulated predictions in the lab and use the results to refine the model, so they can test new ideas and generate new hypotheses.