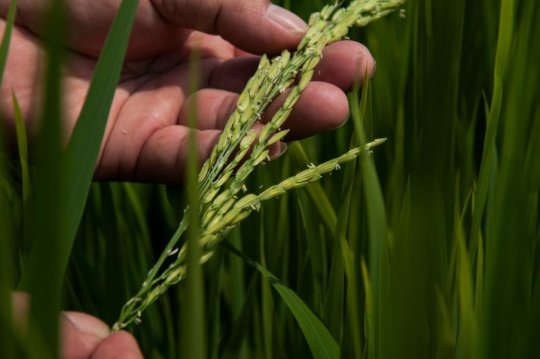 Cacao farmers in Nicaragua lose their crop, the main ingredient for chocolate, to fungal blight and degrading soils. Yields drop in Vietnam’s rice paddies because of higher temperatures and increased salinity. Bean and maize growers in Uganda see their plants die during severe dry spells during what should be the rainy season. The two-punch combination of climate change and poor agricultural land management can be countered with simple measures that keep farms productive and profitable. Implementation of these climate-smart agriculture (CSA) practices can increase yields, benefit the environment and increase farmer income, according to a new cost-benefit analysis by the International Center for Tropical Agriculture (CIAT) published November 19 in PLOS ONE.

The study examines 10 major climate-related issues facing farmers in Africa, Asia and Latin America and proposes site-specific CSA remedies. These include rotating rice fields with peanuts in Vietnam, manual blight control for cacao in Nicaragua, and planting drought-tolerant varieties of beans and maize alongside each other in Uganda.

Where additional investment is required, initial rates of return on investment range from 17 percent to 590 percent. Startup costs can be recovered in one to eight years, depending on the management practice. In all cases, yields increase.

“The potential for these strategies is immense and actionable immediately, if targeted to the right farmers and accompanied by appropriate resources,” said Peter Laderach, CIAT’s Global Climate Change and co-author of the study. “Now, the challenge lies in overcoming the obstacles to implementing their adoption.”

Many CSA practices that improve production, buffer fields against climate change and improve nutrient-poor soils require little additional investment. Sometimes these cost less than business-as-usual farming, which relies on single-crop plantations and chemical fertilizers. But adoption at the most of the research sites in is minimal. Obstacles include resistance to changing habitual farming techniques, labor constraints and lack of access to credit.

“Engaging multiple stakeholders, including the private sector, is crucial in ensuring the widespread and sustained implementation of climate-resilient strategies,” said Margarita Astralaga, the Director of the Environment, Climate, Gender and Social Inclusion Division at the International Fund for Agricultural Development (IFAD), which provided funding for the research.

Le Lan, a researcher at the University of Western Australia and the study’s lead author, said successful CSA interventions by governments and development agencies need to seek “the greatest aggregated benefit to the community” and not just potential gain for individual farmers. “In addition, if the area suffers from extreme climate events, targeted assistance must consider the socioeconomic and cultural realities of farmer groups if the practices are to be widely adopted.”

At the Vietnam study site, the most widely adopted CSA techniques observed was crop rotation between rice and peanuts. This increased profits for farmers and reduced their overall greenhouse gas emissions. Almost one third of farmers had adopted this technique. Ten percent or fewer had implemented organic fertilization, improved rice varieties that withstand drought and salinity, and shrimp farming.

The researchers estimate the adoption potential of five CSA techniques at the Vietnam site range from 23 to 89 percent. Initial investments can be recouped in a maximum of five years, while organic fertilization and peanut rotation are immediately profitable due reduced costs for chemical fertilization and rice planting. In contrast, the research sites in Nicaragua and Uganda showed zero uptake of the study’s CSA strategies.

Nicaraguan cacao farmers can implement manual control of moniliasis — better known as frosty pod rot disease — to recover up to 80 percent of their losses to the pathogen. Organic fertilization and planting banana trees to shade sun-exposed cacao trees can help increase yield at little expense. The researchers estimate a 50 percent adoption rate of these strategies is possible. Estimated rates of return for these practices varies from 17 percent for organic fertilization of cacao over eight years to 590 percent for banana-tree shading over one year.

Northern Uganda’s drought-threatened farmers can benefit from intercropping hardier breeds of beans and maize that mature faster, tolerate drought and have higher yields. Together with implementing water-harvesting techniques for irrigation during dry spells and retaining soil moisture, these varieties — which are already in use in other areas not included in the study site — have the potential to be adopted by 90 percent of farmers. Estimated rates of return are 25 percent over six year and 85 percent over three years for the Uganda site.

“Scaling CSA is at the heart of CIAT and CGIAR strategies,” said Godefroy Grosjean, a co-author and leader of CIAT Asia Climate Policy Hub. “With key partners such as IFAD the World Bank, we are developing CSA Investment Plans for countries including Bangladesh and Mali. Our work also focuses on conceptualizing solutions to unlock investment in the agriculture sector. This year, we launched a new initiative on Agricultural Risks Management that will explore innovative financial products for CSA tailored to farmers’ needs. The research from this paper will be extremely useful to that purpose.”

The study was funded by the International Fund for Agricultural Development (IFAD) in partnership with the CGIAR’s Climate Change, Agriculture and Food Security (CCAFS) research program as part of IFAD’s Adaptation for Smallholder Agriculture Program (ASAP).

CGIAR is a global research partnership for a food-secure future. Its science is carried out by 15 research centers in collaboration with hundreds of partners across the globe. https://www.cgiar.org