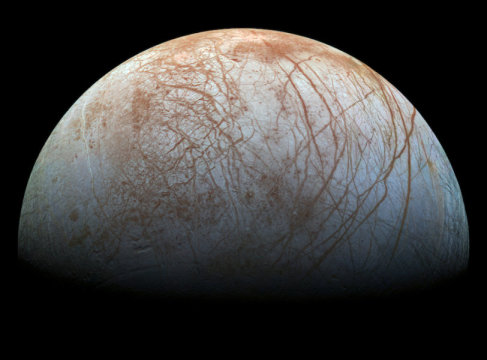 A location often earmarked as a potential habitat for extra-terrestrial life could prove to be a tricky place for spacecraft to land, new research has revealed.

A team led by scientists from Cardiff University has predicted that fields of sharp ice growing to almost 15 metres tall could be scattered across the equatorial regions of Jupiter’s moon, Europa.

Previous space missions have already identified Europa as one of the likeliest destinations for harbouring life in our solar system, most notably because of the large seas of liquid water underneath its surface.

In a new study published today in Nature Geoscience scientists state that any potential landing mission may have to navigate hazardous obstacles known as ‘penitentes’ before touching down on Europa’s surface.

Penitentes are tall sharp-edged blades and spikes made of snow and ice that point towards the midday sun. They form through a process known as sublimation, which requires bright, sustained sunlight as well as cold, dry and still air.

Sublimation is a process through which ice turns directly into water vapour without melting into a liquid first. When sublimation occurs, these distinctive blade-like formations are left behind.

Penitentes are present on Earth and grow to between 1 to 5 metres tall, but they are restricted to high-altitude tropical and subtropical conditions, such as in the Andes.

Europa however has the perfect conditions necessary for penitentes to form more uniformly — its surface is dominated by ice; it has the thermal conditions needed for ice to sublime without melting; and there is very little variation in the angle in which the sun shines on the surface.

In their study, the researchers used observational data to calculate the sublimation rates at various points on Europa’s surface and thus used these to estimate the size and distribution of penitentes.

No spacecraft has yet landed on Europa; however, NASA intends to undertake a number of flybys around the moon with the Europa Clipper, which will be launched in 2022. It is believed a landing mission could follow soon after.

“The presence of sharp, blade-like structures towering to almost 15 metres high would make any potential landing mission to Europa extremely precarious. We hope that studies like ours will help the engineers to develop innovative ways of delivering landers safely on Europa’s surface so that we can find out even more about this fascinating place, and potentially look for signs of extra-terrestrial life.”

Jeff Moore, a co-author on the study and a Planetary Geologist at NASA’s Ames research Center in Mountain View, CA, notes that NASA’s upcoming Europa Clipper mission, set for launch early in the next decade, could directly observe penetentes with its high-resolution camera, and measure other properties of these interesting objects with the spacecraft’s other instruments. Dr Moore is a co-investigator on Europa Clipper.

The study also included researchers from NASA Ames Research Center and the University of Virginia.