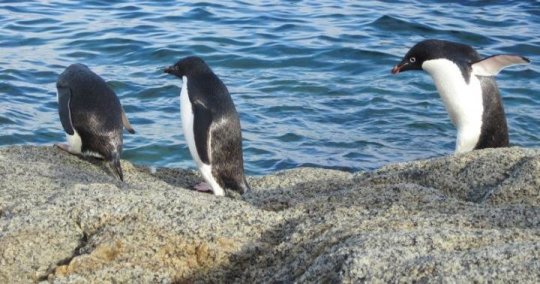 Antarctica has a current that circles the landmass as part of the Southern Ocean. This current is called the Antarctic Circumpolar Current. When the westerly winds strengthen during the Southern Hemisphere’s summer, waters south of the current acidify faster than can be accounted for in carbon dioxide from the atmosphere alone. The opposite pattern was observed north of the current.

Why does this happen and why does it matter?

University of Delaware Professor Wei-Jun Cai co-wrote a paper that appeared in Nature Communications and addresses those questions.

Researchers involved in the study say these effects are due to a combination of processes driven by these westerly winds — a theory that was borne out by two decades’ worth of observational data from south of Tasmania.

Understanding the factors that control ocean acidification is important for predicting the impact that the changing chemistry of the ocean will have on marine organisms and ecosystems in the future. The Southern Ocean, also known as the Antarctic Ocean, is a critical place to study these mechanisms because of its vast capacity to store carbon dioxide from the atmosphere, a crucial component of climate change.

The fourth largest ocean, the Southern Ocean has a naturally low pH and saturation state for aragonite, a carbonate mineral that marine organisms need to build their shells. This is considered to be due to the Southern Ocean’s cold temperatures, which average -2 to 7 degrees Celsius (approximately 28 to 45 degrees Fahrenheit), and strong vertical mixing throughout the water column.

Because of these cold temperatures and deep mixing, the carbon dioxide absorbed at the water’s surface can be quickly transferred to and stored in the deep regions of the Southern Ocean, unlike most lower latitude oceans where huge temperature differences prevent the surface water and the deep ocean from mixing.

As atmospheric carbon dioxide levels continue to increase, however, surface waters in the Southern Ocean are expected to become increasingly vulnerable to ocean acidification.

“The Southern Ocean is a window to the deep ocean,” said Cai, an expert in inorganic carbon chemistry and the Mary A.S. Lighthipe Chair of Earth, Ocean and Environment at UD. ” Better understanding the mechanisms of ocean acidification here can help improve prediction models for how much atmospheric carbon dioxide the ocean can take up here and elsewhere.”

In the southern hemisphere, the main way that the atmosphere varies is through what is known as the Southern Annual Mode (SAM). As this mode changes from one extreme to another, the pressure difference causes the belt of westerly winds (or jet stream) around Antarctica to move north or south. When the jet stream of air strengthens (a positive SAM trend), it contracts toward Antarctica. When the jet stream weakens (a negative SAM trend), it expands north toward the equator.

In their study, the researchers explored how westerly winds regulate the rates of ocean acidification, using continuous data measurements of carbon dioxide from south of Tasmania recorded over two contrasting decades, 1991-2000 and 2001-2011. The researchers attributed the enhanced acidification to the westerly winds transporting more acidic waters horizontally from higher latitude locations toward the equator and vertically from the subsurface to the surface.

“When you have a pressure difference, you have a stronger wind and the wind always moves from high pressure to low pressure, driving the surface ocean currents from one point to another. In physical oceanography we call this wind-driven Ekman transport,” said Cai.

When westerly winds decrease, the result is the opposite and less acidic surface water is transferred toward the South Pole.

“Whether we study this in the Chesapeake Bay, the Gulf of Mexico or the Southern Ocean, it is all the same reason that another source of carbon dioxide or acidified water comes into the study area. But depending on the location, this mechanism can manifest itself differently,” said Cai.

This Southern Ocean mixing extends to a depth of approximately 300 to 400 meters (around 1,000 to 1,300 feet). This is far deeper than, say, in the Chesapeake Bay or oxygen-deficient Gulf of Mexico where the water’s deepest regions might extend only 20 to 50 meters (54-164 feet deep).

In theory, as atmospheric carbon dioxide increases, ocean carbon dioxide levels (i.e., ocean acidification) should increase in parallel. However, Cai explained that upwelling of deeper waters that contain more carbon dioxide combined with ocean circulation patterns, or mixing of different layers of the ocean, can cause the water’s pH and carbonate saturation state to vary quite a lot. Cai said though there have been a few recent papers in this area, he and his colleagues are the first to show with direct data that this is caused by wind stress.

“There is a lot of debate on this issue, but when put together, the two decades’ worth of data gave a consistent story that ocean circulation patterns really affect ocean acidification,” said Cai.

So, what does the Southern Ocean have to do with Delaware?

“The Southern Ocean is an area that really changes the deep ocean carbon dioxide signal because of this rapid mixing to the deep ocean,” said Cai. “Consequently, when wind speeds cause the layers of the water to mix and change circulation patterns, it really can drive changes that may be significant to the global ocean, and broadly, would eventually influence other areas, including the Atlantic Ocean.”