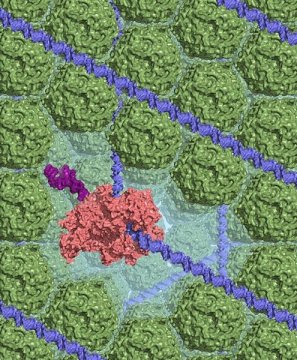 Bacteria cause many serious illnesses, from food poisoning to pneumonia. The challenge for scientists is that disease-causing bacteria are extraordinarily resilient. For example, when bacteria like Escherichia coli (E. coli) undergo starvation, they massively reorganize their bacterial DNA, allowing them to survive stressful conditions.

In order to accomplish this feat and up their chance of survival, E. coli strains dramatically increase the amount of a protein called Dps, which compacts the bacterial DNA into a dense, crystal-like complex and protects it from being damaged. While previous research indicated that Dps is what protects bacteria from succumbing to starvation and other stressors, researchers did not know how this special protein worked.

In a new paper published in Cell, Anne Meyer, an associate professor of biology at the University of Rochester, along with Elio Abbondanzieri, a research associate, and other colleagues, describe some of the unique characteristics of Dps that help bacteria survive stressful conditions. Their research may help lead to more targeted antibiotics and other drug therapies.

The ‘Recipes’ Within Cells

Imagine that each of the strands of DNA in your cells are individual recipes. To make hair, you would pull out the hair recipe card. To digest your food, you would follow the digestion recipe card and express the gene “ingredients” in that recipe. When you’re cooking, however, you don’t want to have all your recipes bout in the kitchen at once, so you protect them by storing them away in a recipe box and pulling out the ones you need at the moment.

Cells in higher organisms such as plants and animals do not contain Dps. Yet, they do something similar, according to Abbondanzieri. “They package and compact portions of their genomes when they do not need them, like recipes stored away in a box. Compaction can help protect DNA from damage because the DNA is ‘sealed off’ from the rest of the cytoplasm.”

“Since we know Dps compacts bacterial DNA, we thought it would be quite likely that this compacting would cause a big change in the genes that are expressed,” Meyer says.

While Dps did compact the bacterial DNA, the compaction did not have any effect on the expression of the genes. The enzyme that expresses, or transcribes, genes — RNA polymerase (RNAP) — was able to bind to DNA and express genes equally as well whether or not the DNA was condensed by Dps during times of stress.

What, then, is the main role of Dps, if gene expression is preserved whether or not bacterial DNA is compacted?

The researchers observed that while RNAP still had full access to the Dps-compacted DNA, other proteins that could cut and damage DNA were completely blocked. Therefore, they theorize that Dps may condense bacterial DNA to protect the DNA from being broken or mutated, while still allowing the bacteria to express genes that help it fight stressful conditions.

If this is the case, the protective action of Dps is further enhanced by localized effects when it binds to DNA. For example, Dps can neutralize iron, an element that causes extensive damage to DNA.

Recognizing the effects of Dps could lead to the development of more targeted antibiotics.

“Many pathogenic bacteria, including those responsible for food poisoning, urinary tract infections, and Crohn’s disease, rely on Dps to survive in their hosts,” Meyer says. “What our research shows is if you want to target Dps action, you need to directly block its DNA binding or iron oxidation.”

Meyer also notes that the research could potentially lead to radical new therapies that employ Dps as a shield to protect human DNA in high-stress environments, such as areas with high levels of radiation.

Could Dps be used in humans or other higher organisms to protect DNA while still allowing it to carry out its other functions?

Says Meyer: “I have no idea if this would work, but I think it would be really interesting to try out in a laboratory setting.”