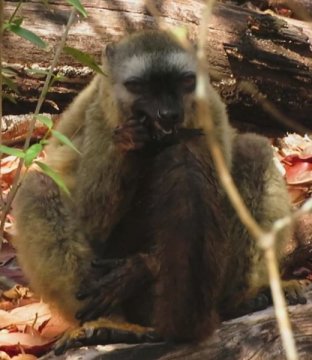 Madagascar’s red-fronted lemurs may have a secret weapon from nature’s medicine cabinet: millipedes. This is according to a study led by Louise Peckre of the German Primate Center at the Leibniz Institute for Primate Research in Germany. Peckre and her colleagues believe that lemurs chew on millipedes to treat and prevent conditions such as itching or weight loss which are caused by parasites that might live in and around their guts. The research is published in the Springer-imprint journal Primates, which is the official journal of the Japan Monkey Centre.

Lemurs, alongside other primates like spider monkeys, have a habit of rubbing foreign objects, substances or materials over parts of their bodies. Experts refer to such actions as self-anointing, and they believe that animals do this as a form of communication, to remove toxic substances before ingestion, or as a way of self-medicating.

Peckre and her colleagues observed five groups of red-fronted lemurs (Eulemur rufifrons) in Kirindy Forest on the African island of Madagascar. During several observations they noted that six animals in the groups were chewing on millipedes (likely Sechelleptus). These millipedes had emerged a few hours after the first heavy rain of the season. The chewing produced copious amounts of an orange-coloured substance which the researchers assumed was a mixture of saliva and millipede secretions. The animals then rubbed the area around their genitals, anuses and tails with the chomped millipedes. Quite a few millipedes were also swallowed after much chewing.

“Self-anointment combined with eating millipede secretions may be a way of self-medication by red-fronted lemurs,” says Peckre.

The researchers believe that the lemurs eat the millipedes specifically because they secrete benzoquinone, a substance that is also known to repel mosquitoes. Self-anointment in this way could help the animals cleanse themselves of parasites often found in their gastric system and intestines and, more specifically, Oxyuridae nematodes that are known to cause irritation around animals’ anus area. Being infested with these worms and their eggs often causes an animal’s skin to break out in an itchy rash. The pinworm that can be problematic for humans is, for example, part of this group of nematodes.

“Strikingly, during the fur-rubbing observations, we noticed the presence of bald areas on the lower back of many animals. These are known as sit spots, and are likely caused by repeated rubbing,” explains Peckre. “These bald areas may then indicate the presence of infections by Oxyuridae in the population at the time.”

Peckre and her colleagues believe that the lemurs use the millipedes not only to treat the condition, but also to prevent it. The researchers would like to see further research that compares primate species that anoint their body without ingesting the millipedes to those species that also ingest the millipedes. They expect that primates that are more exposed to digestive parasites would be more likely to eat the crushed millipedes.

Several species of birds and mammals are known to rub themselves with millipedes and even to eat them. Most millipedes secrete a variety of chemicals to defend themselves from predators. These chemicals are sedative, repellent, irritant and toxic.