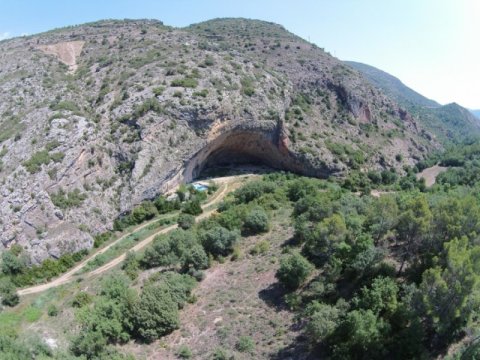 A study conducted by the UAB and the IPHES confirms a continuous presence of montane coniferous forests from the Pyrenees to the Mediterranean coast from 50,000 to 15,000 years ago, demonstrating their resilience to the extreme and ever changing climate conditions of the period.

Carbon analysis of the Cova Gran de Santa Linya, in Lleida’s Pre-Pyrenees region, indicates that there were abundant Scots pine forests which were used as the main source of firewood by the Neanderthals and Homo sapiens inhabiting the area.

The analysis of charcoal from the hearths of the Cova Gran settlement, located in Les Avellanes-Santa Linya, Lleida at 385 metres above sea level, confirms that montane forests of the northeastern part of the Iberian Peninsula covered the Pyrenees and reached the Mediterranean coast some 50,000 to 15,000 years ago, with a large predominance of montane pine trees and most probably Scots pine.

The study also allowed researchers to obtain detailed information on the type of firewood preferred by Homo neanderthalensis and Homo sapiens, who successively inhabited the Pyrenean shelter during this period.

The research was conducted by Rafael Mora, Jorge Martínez-Moreno and Miquel Roy from the Centre for the Study of Prehistoric Archaeological Heritage, Universitat Autònoma de Barcelona (CEPAP-UAB), in collaboration with Ethel Allué, from the Catalan Institute of Human Paleoecology and Social Evolution (IPHES) and the Rovira i Virgili University (URV), and Alfonso Benito-Calvo, from the National Centre for Research on Human Evolution (CENIEH). It was published in the journal Review of Palaecobotany and Palynology.

Researchers analysed a total of more than 1,200 carbon fragments from the hearths of some fifteen archaeological units. “The anthracological analysis of such a compound used during so many years as is Cova Gran, together with data from other sites in the region, indicates a hegemonic presence of Scots pine in the northeast of the Iberian Peninsula and demonstrates that despite the occurence of extreme climate changes, the montane coniferous forests cover was continuous,” says IPHES researcher Ethel Allué.

The range of periods covered by the study climatically corresponds to two marine isotope stages (MIS): the MIS 3, (between 59,000 and 29,000 years ago) with relatively short warm periods alternated with cold cycles, and the MIS 2 (from 29,000 to 15,000 years ago), with extremely cold conditions.

“The resilience of these pine trees allowed them to adapt to rigorous ecological and environmental conditions, colder and more arid than now, and be able to live in the plains and Mediterranean pre-coastal range,” the researcher affirms.

Scots pine wood is practically the only firewood identified in the different chronocultural phases recognised in the Cova Gran: Late Middle Paleolithic (LMP), Early Upper Paleolithic (EUP) and Magdalenian. The abundance of hearths located in this Pre-Pyrenean shelter and the fact that Neanderthals and modern humans used it, indicates that both species used these trees systematically for firewood.

“The registries made at Cova Gran in Santa Linya allows us to delve deeper into the aspects of the site’s landscape and the biogeography of a tree which was essential to the survival of Ice Age hunter-gatherers,” indicates CEPAP-UAB Director Rafael Mora. “The continuity in choosing this type of firewood at this site must have been due to its abundance in the immediate surroundings, even though being easy to light and a high energy content also favoured the intentional gathering of this type of wood. In consistency, this allows us to strengthen our hypothesis of the continuous presence in the region of these stable and resilient montane pine forests,” he concludes.

Scots pine can currently be found in the range of the northeastern region of the Pre-Pyrenees, at altitudes greater than 600 metres. Current climate conditions, which began to appear some 15,000 years ago, made them retrocede to higher and colder altitudes, while other species such as Aleppo pine, oak and holm oak began to populate the lower wooded areas.

The Archaeological Importance of the Cova Gran de Santa Linya

The archaeological site of Cova Gran de Santa Linya, discovered in 2002, measures over 2,500 square metres and is considered to be essential for the study of human presence in the northeast of the Iberian Peninsula. Its wide chronological spectrum ranges from 50,000 to 7,000 years ago, which allows researchers to reconstruct the life of humans living in Catalonia’s pre-Pyrenees region.

It is one of the few sites in the Mediterranean in which moments of “transition” have been identified, such as that of the last Neanderthals and the appearance of the first modern humans, or the moment in which hunter-gatherers gave way to the first farmers and herders.

In 2016 engravings dating back to the Upper Paleolithic were discovered on the walls of the rock shelter and are considered to be the earliest artistic representations existing in Catalonia. This year, the head of a deer engraved in bone was found in the layer of the same time period.

Throughout these fifteen years numerous material remains have been recovered, including assegais, needles and bone ornaments such as a perforated deer tooth from the Upper Paleolithic’s Magdalenian epoch. Discoveries from the Neolithic period include several layers of livestock stabling, known as pen diposit.

With regard to hearths, it is one of the sites in the Iberian Peninsula in which the greatest number of hearths have been identified. This demonstrates the importance of fire and its management for the daily life of Neanderthals and Homo sapiens. This source of energy not only allowed them to obtain and process food and generate light and heat. It also actively contributed to cementing the relationships among components of the groups inhabiting Cova Gran.