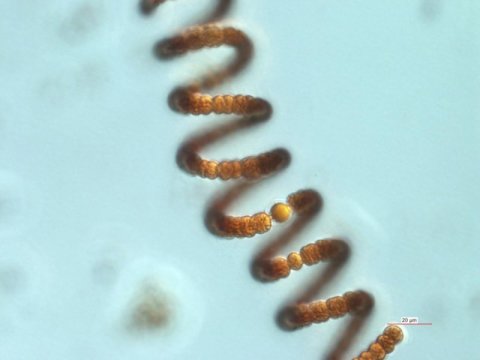 For decades, experts have debated whether reducing the amount of nitrogen flowing into lakes can improve water quality in the long-term, even though blue-green algae can bind nitrogen from the air. However, no lakes with decreased nitrogen inputs have been monitored for long enough to clarify this — until now: scientists from the Leibniz-Institute of Freshwater Ecology and Inland Fisheries (IGB) have analysed long-term data to prove that decreasing nitrogen in Berlin’s Lake Müggelsee is the key to reducing algal blooms in summer. They showed that the amount of atmospheric nitrogen bound by blue-green algae is far too small to be used as an argument against the ecologically necessary reduction of nitrogen inputs.

In the 1970s, scientists discovered that nutrient inputs — mainly phosphorus and nitrogen — from agriculture and wastewater discharge were the main cause of excessive plant and algal growth in lakes and rivers. Since then, water management experts have concentrated on reducing phosphorus inputs. “Although this strategy often works, it is by no means always successful. In shallow lakes, the sediment releases large quantities of phosphorus in summer. In these cases, reducing nitrogen input may help to control algal blooms because algae need both phosphorus and nitrogen to grow. Until now, however, there has been no convincing evidence that decreasing nitrogen inputs, which is more complex and costly than decreasing phosphorus, works in the long term,” stated IGB freshwater ecologist Dr. Tom Shatwell, explaining the starting point of the study.

To conduct their investigation, the scientists statistically analysed 38 years of data (1979-2016). Since the 1970s, Lake Müggelsee (in Berlin, Germany) and its tributaries have been sampled on a weekly basis as part of a long-term programme to investigate phosphorus and nitrogen concentrations as well as the species composition in algal communities. Müggelsee is one of the few lakes in the world that have experienced a significant decrease in phosphorus and nitrogen pollution and that have been monitored for a sufficiently long time to draw conclusions on the effects of reducing nitrogen inputs.

Every summer, there was an excess of phosphorus in the water of Lake Müggelsee. The scientists concluded it was the decrease in nitrogen that caused algae blooms to decrease — and water clarity to increase. Contrary to common views, blue-green algae species did not replace the nitrogen missing from the tributaries with nitrogen from the atmosphere in the long term. In fact, blue-green algae did not increase in abundance and there was very little binding of atmospheric nitrogen. “It takes much more energy to fix atmospheric nitrogen than it does to use nitrogen compounds present in the water. Blue-green algae obviously only use this method when absolutely necessary and when there is sufficient solar energy,” explained Dr. Jan Köhler, co-author and leader of the “Photosynthesis and Growth of Phytoplankton and Macrophytes” research group at IGB.