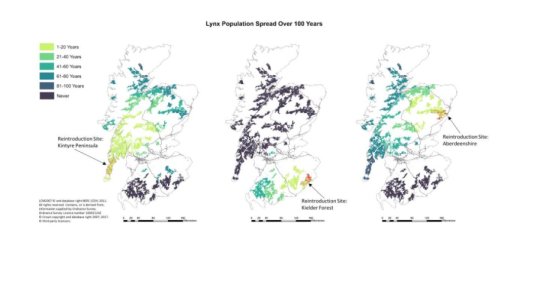 Experts have used an innovative approach to model the proposed reintroduction of the Eurasian lynx to Scotland.

Researchers used state-of-the-art tools to help identify the most suitable location for lynx reintroduction in Scotland — and how this choice might affect the size of a population and its expansion over subsequent decades. Significantly, they believe their model will inform and enhance decision-making around large carnivore reintroductions worldwide.

The study was led by University of Stirling PhD researcher Tom Ovenden as part of his Masters in Environmental Forestry at Bangor University, with support from the University of Aberdeen.

“Our research considered several proposed reintroduction sites, showing how these models can be used as a safe and relatively inexpensive way of assessing the suitability of reintroduction proposals and providing the evidence required to inform decision-making at an early stage.

“Recent advances in both ecological theory and modelling approaches have made the incorporation of individual species’ complex behaviours in novel environments more realistic. We applied this approach to the potential reintroduction of Eurasian lynx in Scotland — and demonstrated the power of this new, sophisticated model. Our research demonstrates the potential of this approach to be applied elsewhere to help improve reintroduction success in large carnivores, from the safety of a modelling environment.”

The lynx is thought to have become extinct in the UK during the medieval period, around 1,300 years ago. In recent years, its potential reintroduction has been widely debated.

Using current land cover data, Mr Ovenden conducted an initial desk-based study to establish the current location and extent of suitable forest habitat for lynx in Scotland, updating historic work. Further research to identify the demographic and dispersal characteristics of the lynx elsewhere in Europe, provided the model with the necessary parameters.

The team used this information to investigate the suitability of three proposed release sites: the Scottish component of Kielder Forest, in the Borders; Aberdeenshire; and the Kintyre Peninsula. They used the model to assess how the lynx would establish a population, spread and colonise new habitat from each potential reintroduction site over a period of 100 years.

The results showed that Scotland possesses sufficient, connected habitat to offer a realistic chance of population establishment and that some sites are more suitable than others.

Of the three sites considered, the study indicated that the Kintyre Peninsula was the most suitable, with the population spreading across the Highlands in the 100 years following release. Significantly, the Central Belt would act as a barrier to colonisation between the Highlands and Southern Uplands providing evidence for two distinct habitat networks.

“This initial research is encouraging and suggests that Scotland is indeed ecologically suitable for the reintroduction of Eurasian lynx — but this suitability is highly dependent on where reintroduction takes place and more modelling work is required,” Mr Ovenden said. “Our research informs one aspect of a complex decision-making process that must involve a wide range of stakeholders and, as a result, it does not recommend whether we should, or should not, reintroduce Eurasian lynx to Scotland.

“We have established a solid foundation upon which more modelling can now be conducted, however, further research is required to assess other important issues — such as socio-economic factors and public attitudes — to enable informed, comprehensive decision-making. It is our hope that this tool will not only provide evidence to guide the current debate in Scotland, but can be used more widely in discussions around large carnivore reintroductions globally.”

Jo Pike, Director of Public Affairs at the Scottish Wildlife Trust, said: “Returning the lynx to our landscape as a top predator could help restore the health of Scotland’s natural ecosystems. Any future reintroduction would have to be carefully planned, widely consulted on, and rigorously assessed against national and international guidelines. This research is a useful contribution to the evidence base that needs to be developed over the coming years.”

Notably, Mr Ovenden wrote his entire dissertation using solar power, while running the Handa Island nature reserve, in the Inner Hebrides, for the Scottish Wildlife Trust. He worked under the supervision of Professor John Healey, of Bangor University, and collaborated with Dr Steve Palmer and Professor Justin Travis, of the University of Aberdeen.

Mr Ovenden is now working towards a PhD at Stirling, in collaboration with Forest Research and The Scottish Forestry Trust, on the resilience of UK forests to extreme climatic events.

The study, Improving reintroduction success in large carnivores through individual-based modelling: how to reintroduce Eurasian lynx (Lynx lynx) to Scotland, is published in Biological Conservation.