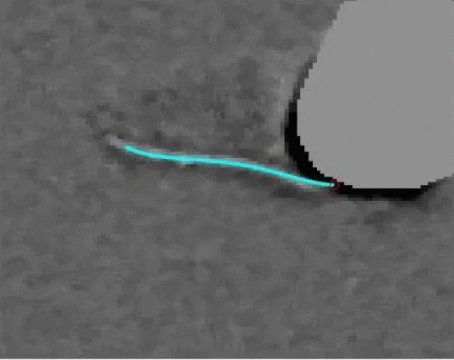 Human bodies have some built-in systems to care for themselves. The cells that line our lungs, nose, brain and reproductive system have cilia, which are tiny, hair-like structures designed to sweep out fluids, cells and microbes to stay healthy. But the mechanisms behind their motion are not well understood.

A team of researchers in the McKelvey School of Engineering and the School of Medicine at Washington University in St. Louis wanted to determine how length affected the mechanical efficiency of beating cilia. They found that most mechanical metrics, including force, torque and power, increased in proportion to the length of the cilia, but there was a “sweet spot” in terms of efficiency. The findings give insight into cilia in humans and how defects lead to disease, such as primary ciliary dyskinesia, which is associated with chronic respiratory infections, changes in the right-left axis and heart defects. The results will be published in the April 9 issue of Biophysical Journal.

The study was led by Mathieu Bottier, a postdoctoral researcher in the lab of Philip Bayly, the Lilyan & E. Lisle Hughes Professor of Mechanical Engineering and chair of the Department of Mechanical Engineering & Materials Science; and the lab of Susan K. Dutcher, professor of genetics and of cell biology and physiology at the School of Medicine. The researchers used high-speed video microscopy to analyze a model for cilia to determine their mechanical metrics. After analyzing nearly 400 videos, the team found that the most efficient beating of cilia was at its natural length of 10-12 microns, or about one-fifth the width of a human hair.

“Something we did not expect is that the short cilia would not be periodic,” Bottier said. “The cilia are all moving, but we find no actual pattern of beating — nothing was synchronized — and that was our first discovery.”

The team used Chlamydomonas reinhardtii, a single-cell green alga that normally swims with two propulsive tails and is frequently used as a model for mammalian cilia. Bottier and Kyle Thomas, a senior undergraduate student majoring in biomedical engineering, used a mutant with only one cilium that spins in place, allowing longer video recording. They removed the cilium, then recorded the regrowth by video. The cilium took about 90 minutes to return to its normal length, and while its waveform varied slightly from that of the standard cilia, its key characteristics were similar.

“We wanted to see the cilium beating, which we did with the video,” Bottier said. “Then we asked how we could describe it, and the best way was to look at the average beat. We recorded five or six cycles of beating that repeat periodically, and from those five or six, we can reconstruct one average, which will remove the eventual outliers.”

The cilium’s beating takes place via a series of bends that begin at its base and extend to the tip. The team found that periodic beating begins when cilia become longer than two to four microns, which means that a critical length is necessary for the cilia to beat. In previous research, scientists had not studied cilia shorter than five or six microns, Bottier said. Another new observation is that the beat frequency in periodically-beating cilia is quite consistent over the normal range of cilium length, although it decreases slightly as length increases from four microns to 12 microns, Bayly said.

This work may help to understand human mutations that make cilia short and how short cilia will impact the patient’s outcome, Dutcher said.

Thomas said the research provides a better understanding of how cilia operate and what causes the oscillations.

“There are a lot of different models presented on what drives this bending pattern, so this study helped to learn which models are more accurate and which may have inaccuracies, so we can understand when there is a cilia dysfunction, what causes it because that could spark some conversations on how we go about treating it,” Thomas said.