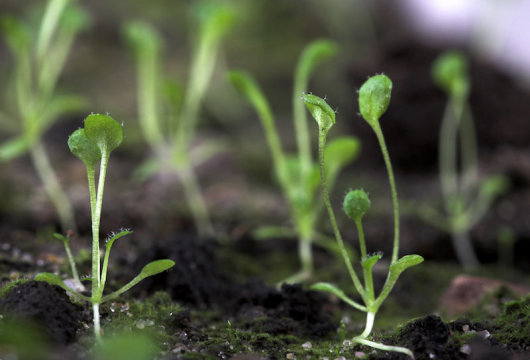 Plants function as the green lungs of our planet. Rightfully so, due to the capacity of a large single tree releasing more than 120 kg of oxygen into the Earth’s atmosphere every year through a series of sunlight-fuelled reactions in photosynthesis. However during flood events, plant tissues may experience severe oxygen shortage, a stressful situation that every year leads to substantial loss in yield for all major crops such as rice, wheat and barley.

Researchers from the Department of Biology at University of Copenhagen, University of Pisa in Italy and RWTH Aachen University and University of Heidelberg both in Germany have now discovered that low oxygen concentrations (hypoxia) provide essential conditions for plant growth.

“Equipped with a new generation of microscopic oxygen probes, we were able to measure the oxygen concentration of a tissue cubicle of approximately thirty cells, referred to as the shoot apical meristem,” says professor Ole Pedersen, University of Copenhagen. “We found that in this region, a niche of low oxygen envelops the stem cells that are responsible for the production of new leaves and flowers. Here, low oxygen levels control the rate at which new leaves are produced by promoting the stability of a protein, named ZPR2, responsible for cell proliferation and differentiation.”

Hence, most plant tissues suffer severely in the presence of hypoxia as caused by flood event but this new study clearly shows that hypoxia is a prerequisite for the maintenance of stem cells.

This discovery follows those made in recent years about the control of plant metabolism in anaerobiosis, also published in Nature and Nature Communications and represents a step forward towards the understanding of how the production of new organs is connected to environmental parameters that affect plant growth and productivity.

The requirement of low oxygen levels to maintain stem cells is not unique to plants. Also several types of stem cells of animals, including human, share the same feature. This is remarkable since plants and animals are only very distinctly related in evolutionary context, but both represent the highest level of complexity in terms of multicellular organisation in tissues. Apparently, establishment and maintenance of low oxygen is a requisite for the activity of ‘factories’ of new cells and therefore developed independently in both plants and animals.

Applications of this discovery are twofold. Breeders have now a new target for the selection of novel crop varieties, better adapted to maintain productivity in suboptimal environments that affect respiration, such as high temperature or rapid flooding. Moreover, researchers will now compare plant and animal stem cells to uncover the secrets of stem cell maintenance and development of organs.

Materials provided by Faculty of Science – University of Copenhagen. Note: Content may be edited for style and length.