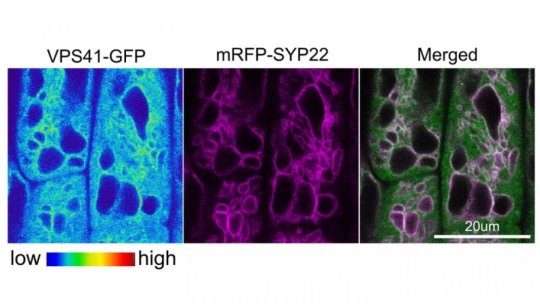 A little-studied plant cellular complex plays an essential role in a biological process — vacuole fusion — critical to plant growth and development, according to new research from North Carolina State University. The findings shed light on complex and important plant processes as well as on how plants may have adapted to respond to environmental signals.

Vacuoles are critical plant cell units that comprise some 80 to 95 percent of most plant cells. Plants die if vacuoles fail to develop properly. Believed to be a kind of plant garbage dump, with multiple roles in storage and recycling, vacuoles are also critical for pollen development, with sterility the consequence if the process goes awry.

While many plant cells contain one large vacuole, Marcela Rojas-Pierce wants to examine how, in some model plant Arabidopsis cells, vacuoles control the opening and closing of stomata — plant “pores” that must be regulated to balance carbon dioxide intake and the release of oxygen via water vapor.

“Vacuoles fuse together when stomata open as they are exposed to light, and then they come apart or fragment to close the stomata when it is dark,” Rojas-Pierce, associate professor of plant and microbial biology at NC State and the corresponding author of a paper describing the research, said. “But this beautiful and elaborate system must be tightly regulated to properly ensure the plant’s response to the environment.”

Rojas-Pierce and colleagues examined the homotypic fusion and vascular protein sorting, or HOPS, complex of proteins. First identified as important in vacuole fusion in yeast, HOPS works with another group of proteins, the soluble NSF attachment protein receptors, or SNAREs, to promote vacuole fusion.

She added that this system is similar in other eukaryotes, or organisms with a cell nucleus.

The study also revealed some surprising findings. In yeast, the presence of certain lipids is required for vacuolar fusion to take place. This and a previous study found, instead, that these regulatory lipids inhibited vacuole fusion in plants. The current study also showed that the curvature of the vacuolar membranes may play an important role in their fusion in plants.

“This study showed both highly conserved and specific mechanisms for HOPS and its role in vacuolar fusion,” Rojas-Pierce said.