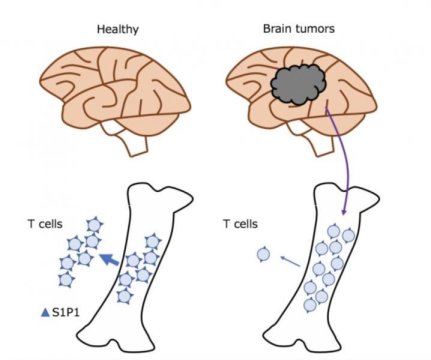 Certain brain cancers are associated with low numbers of immune system T-cells circulating in the peripheral blood. Low T-cell numbers can be a side-effect of cancer treatment. But it now appears that there is more to the story of these missing T-cells.

Researchers from multiple institutions, including Osaka University, have now revealed how brain cancers escape detection by the immune system by inhibiting the proper functioning of T-cells. The researchers revealed the high concentrations of T-cells trapped in bone marrow and propose the strategy by which cancers sequester these cells. They recently published their findings in Nature Medicine.

The researchers reviewed imaging results and blood tests of patients with brain cancer and confirmed that these patients had low T-cell levels, compared to controls, even prior to being treated. The patients also had contracted spleens, indicating the T-cells were not hiding there. The same results were seen in mice. Remarkably, analysis of mouse bone marrow revealed a large expansion in T-cell numbers.

“When we examined the bone marrow of human patients, we found the same sequestration of T-cells as in the mice,” study lead author Pakawat Chongsathidkiet says. “When there was tumor in the brain, the immune cells that would normally attack the tumor appeared to be trapped in the bone marrow.”

Using flow cytometry, the researchers found a strong inverse relationship between the level of the T-cell surface protein S1P1 and T-cell numbers in the bone marrow. Functioning S1P1 is needed for T-cells to leave the bone marrow and other immune system organs, such as spleen, lymph nodes and thymus. The effects of the tumor appeared to prevent cells from leaving the bone marrow.

Next the researchers uncovered the mechanism by which the T-cells can be freed. Blocking the cell’s ability to internalize S1P1 caused the T-cells to re-emerge from the marrow.

“We expect these results to provide clues that will help improve the effects of immunotherapy treatments for brain tumors,” says coauthor Shohei Koyama. “It should be possible to induce these trapped T lymphocytes to migrate and attack the tumor.”

Overall, these findings suggest that therapies that activate T-lymphocytes may be useful adjuncts to current treatment of cancers inside the skull.