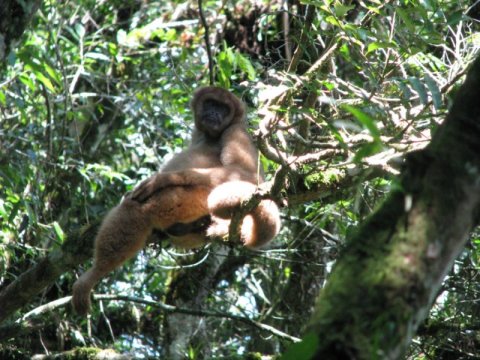 Five centuries of over-exploitation has halved mammal populations in South America’s Atlantic Forest — according to new research from the University of East Anglia.

A new analysis of mammal populations, published today in the journal PLoS ONE, has revealed the devastating effects of human disturbance over the last 500 years.

More than half of the local species assemblages — sets of co-existing species — of medium and large mammals living in the forest have died out since the area was first colonised in the 1500s.

Human activity is largely responsible for this overwhelming biodiversity loss according to the study, which compared inventories published over the past 30 years with baseline data going back to historical times in Colonial Brazil.

Originally covering around 1.1 million square km, the Atlantic Forest lies mostly along the coast of Brazil and is the world’s longest continuous latitudinal stretch of tropical forest. Activities such as farming and logging — as well as fires — have reduced the Forest to about 0.143 million square km which has, in turn, had a significant impact on mammalian populations.

The team analysed species loss among almost 500 medium-to-large-bodied local sets of mammal species that had been surveyed within the vast Atlantic Forest region.

As well as looking at individual species, the team examined species groups, to try to understand which ecologically related groups of species had diminished most rapidly. They found that apex predators and large carnivores, such as jaguars and pumas, as well as large-bodied herbivores, such as tapirs were among the groups whose numbers had suffered the most.

Prof Peres, from UEA’s School of Environmental Sciences, said: “Our results highlight the urgent need for action in protecting these fragile ecosystems.

“In particular, we need to carry out more comprehensive regional scale studies to understand the local patterns and drivers of species loss.

“Efforts to protect the Atlantic Forest and other tropical forest ecosystems often rests on uncooperative political will and robust public policies, so we need compelling data to drive change.”

Dr Bogoni, first author of the study, said: “The mammalian diversity of the once majestic Atlantic Forest has been largely reduced to a pale shadow of its former self.

“These habitats are now often severely incomplete, restricted to insufficiently large forest remnants, and trapped in an open-ended extinction vortex. This collapse is unprecedented in both history and pre-history and can be directly attributed to human activity.”

Materials provided by University of East Anglia. Note: Content may be edited for style and length.