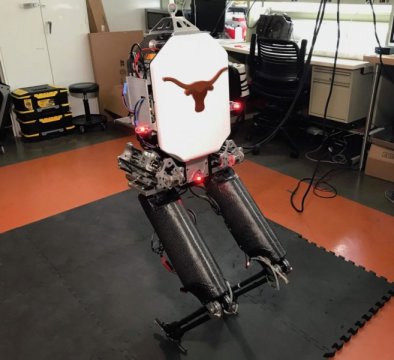 When walking in a crowded place, humans typically aren’t thinking about how we avoid bumping into one another. We are built to use a gamut of complex skill sets required to execute these types of seemingly simple motions.

Now, thanks to researchers in the Cockrell School of Engineering at The University of Texas at Austin, robots may soon be able to experience similar functionality. Luis Sentis, associate professor in the Department of Aerospace Engineering and Engineering Mechanics, and his team in the Human Centered Robotics Laboratory have successfully demonstrated a novel approach to human-like balance in a biped robot.

Their approach has implications for robots that are used in everything from emergency response to defense to entertainment. The team will present their work this week at the 2018 International Conference on Intelligent Robots and Systems (IROS2018), the flagship conference in the field of robotics.

By translating a key human physical dynamic skill — maintaining whole-body balance — into a mathematical equation, the team was able to use the numerical formula to program their robot Mercury, which was built and tested over the course of six years. They calculated the margin of error necessary for the average person to lose one’s balance and fall when walking to be a simple figure — 2 centimeters.

“Essentially, we have developed a technique to teach autonomous robots how to maintain balance even when they are hit unexpectedly, or a force is applied without warning,” Sentis said. “This is a particularly valuable skill we as humans frequently use when navigating through large crowds.”

Sentis said their technique has been successful in dynamically balancing both bipeds without ankle control and full humanoid robots.

Dynamic human-body-like movement is far harder to achieve for a robot without ankle control than for one equipped with actuated, or jointed, feet. So, the UT Austin team used an efficient whole-body controller developed by integrating contact-consistent rotators (or torques) that can effectively send and receive data to inform the robot as to the best possible move to make next in response to a collision. They also applied a mathematical technique — often used in 3D animation to achieve realistic-looking movements from animated characters — known as inverse kinematics, along with low-level motor position controllers.

Mercury may have been tailored to the specific needs of its creators, but the fundamental equations underpinning this technique in our understanding of human locomotion are, in theory, universally applicable to any comparable embodied artificial intelligence (AI) and robotics research.

Like all the robots developed in Sentis’ lab, the biped is anthropomorphic — designed to mimic the movement and characteristics of humans.

“We choose to mimic human movement and physical form in our lab because I believe AI designed to be similar to humans gives the technology greater familiarity,” Sentis said. “This, in turn, will make us more comfortable with robotic behavior, and the more we can relate, the easier it will be to recognize just how much potential AI has to enhance our lives.”

The research was funded by the Office of Naval Research and UT, in partnership with Apptronik Systems, a company of which Sentis is co-founder.

The University of Texas at Austin is committed to transparency and disclosure of all potential conflicts of interest. The university investigator who led this research, Luis Sentis, has submitted required financial disclosure forms with the university. Sentis is co-founder, chairman and chief scientific officer of Apptronik Systems, a robotics company in which he has equity ownership. The company was spun out of the Human Centered Robotics Lab at The University of Texas at Austin in 2016. The lab, which developed all equations and algorithms described in this news release, worked with Meka to develop the original robot in 2011. Apptronik designed new electronic systems for it in 2018.