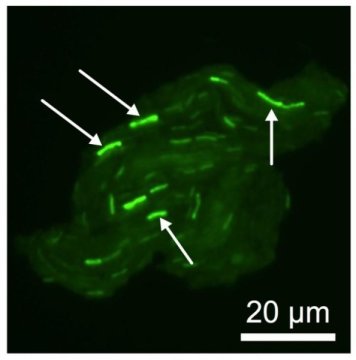 University of Montana researchers recently published their new insights into how pathogenic bacteria resist antibiotic treatment in Proceedings of the Natural Academy of Sciences.

“Antibiotic resistance is a major problem,” said Patrick Secor, assistant professor in UM’s Division of Biological Sciences and lead researcher on the paper. “However, it is often the case that if you take bacteria that survive antibiotic treatment from someone’s infected lungs and treat those same bacteria with antibiotics in the lab, the bacteria die. We wanted to understand why.”

Secor and researchers at UM and the University of Washington discovered that polymers present in airway mucus physically push on bacterial cells.

“We found that bacteria living in high concentrations of polymers get a little stressed out,” said Lia Michaels, a researcher at UM and co-author of the paper. “Basically, the polymer-rich environment activates stress responses in the bacteria, causing them to tolerate higher levels of antibiotics.”

“I like to compare it to the stress our bodies undergo when we exercise,” Secor said. “Exercising today allows you to run a little further or lift a little more weight later on. This is analogous to the stress responses turned on in bacteria living in airway mucus — exposure to stress today allows the bacteria to survive the stress of antibiotic exposure later on.”

The researchers discovered that stress responses induced by mucus polymers pressing on the bacteria were a result of mild DNA damage in the bacterial cells.

“One thing that this DNA damage did was slow bacterial growth,” said Laura Jennings, UM research assistant professor and co-author of the paper. “Because most antibiotics work best on rapidly dividing cells, these slow-growing bacteria were more difficult to kill with antibiotics.”

The researchers speculate that the mechanisms by which polymers turn on bacterial stress responses could be targeted therapeutically to treat long-term bacterial infections.

“Our hope is that we could come up with new ways to treat bacterial infections or increase the efficacy of antibiotic treatment,” Secor said.