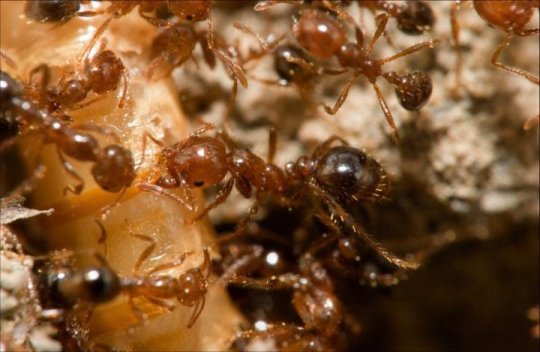 A survey in Japan and Korea has revealed that fire ants are mostly confined to areas in or near container yards or warehouses. However, a Kyoto University study published in Scientific Reports suggests that results of this survey may need to be interpreted cautiously, as conventional food lures may result in underestimating actual ant numbers.

Fire ants are known to love oily foods, and hence potato chips or hot dog slices are often used in surveys in the United States, Australia, and Taiwan. The Kyoto team discovered that ants infected with a particular virus forage much less and prefer carbohydrates such as diluted honey, over oily and protein-rich foods, like tuna and peanut butter.

“This finding might lead to the impression that the pathogen can help us combat invasive ants, but it hinges on our understanding of the role of that virus in the ant’s biology,” says corresponding author Chin-Cheng Scotty Yang of Kyoto University.

Yang elaborates that the lack of fire ants at a lure station doesn’t mean that fire ants are absent. It could be a result of reduced foraging or alterations in food preference induced by the virus.

“These findings also suggest that viral prevalence in the field may potentially influence the efficacy of conventional chemical control by low-toxic baits,” continues co-author DeWayne Shoemaker at the University of Tennessee.

Use of low-toxicity baits for ant control requires that the ants consume a sufficiently lethal quantity. Shoemaker explains that this particular virus appears to disrupt fire ant foraging and food preferences, raising concerns that infected ants may not ingest a sufficient dose of bait for successful control.

“We are now considering how to integrate the virus into existing chemical control schemes,” continues Yang. The team anticipates that this could lead to more efficient and effective fire ant control.

One goal of this consortium is to better understand the biology and interactions of invasive ants and their pathogens, to mitigate their impact.