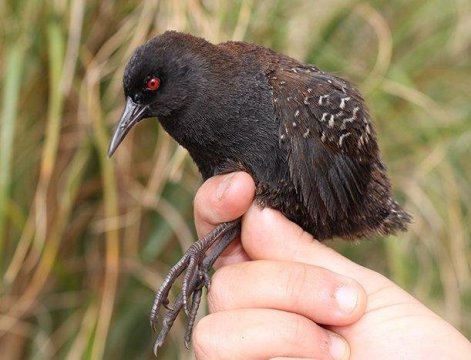 The world’s smallest flightless bird can be found on Inaccessible Island in the middle of the South Atlantic. Less than 100 years ago, researchers believed that this species of bird once wandered there on land extensions now submerged in water, and therefore named it Atlantisia. In a new study led by biologists at Lund University in Sweden, the researchers have now shown that the ancestors of the Atlantisia flew to Inaccessible Island from South America about 1.5 million years ago.

The Inaccessible Island rail (Atlantisia rogersi) is endemic and can only be found on Inaccessible Island. It has no natural enemies on the island and runs around like a small rodent in the vegetation. Biologist Martin Stervander, who now works at the University of Oregon, USA, conducted a study together with researchers from South Africa and Portugal during his time at Lund University.

Among other things, they analysed the DNA of the Inaccessible Island rail using modern sequencing techniques. In this way, the researchers were able to determine that the bird’s closest now living relatives are the dot-winged crake in South America and the black rail found in both South and North America. It probably also has a relative on the Galápagos.

“It seems that rail birds are extremely good at colonising new remote locations and adapting to different environments. Despite great distances, the environments may be similar and, through convergent evolution, distant relatives may in fact become so similar that taxonomists are tricked into drawing erroneous conclusions,” says Martin Stervander.

A theory that proved to be wrong came from Percy Lowe when he described the Inaccessible Island rail almost 100 years ago. Lowe classified the bird in its own genus and drew the conclusion that its inability to fly was a very old trait, and that it colonised Inaccessible Island on foot by walking on land extensions and across continents that later disappeared into the depths of the ocean.

“The fact that Lowe’s theory was incorrect came as no surprise. Using DNA, we can prove that the ancestors of the Inaccessible Island rail flew to Inaccessible Island from South America about 1.5 million years ago,” says Martin Stervander, continuing:

“The bird has not had any natural enemies on the island and has not needed to fly in order to escape predators. Its ability to fly has therefore been reduced and ultimately lost through natural selection and evolution over thousands of years.”

Not being able to fly means that the Inaccessible Island rail does not waste energy on something that is unnecessary in order to survive and propagate.

“Our discovery focuses on the importance of continuing to prevent enemies of the Inaccessible Island rail from being introduced on the island. If that happens, it might disappear,” concludes Bengt Hansson, professor at Lund University and one of the researchers behind the study.