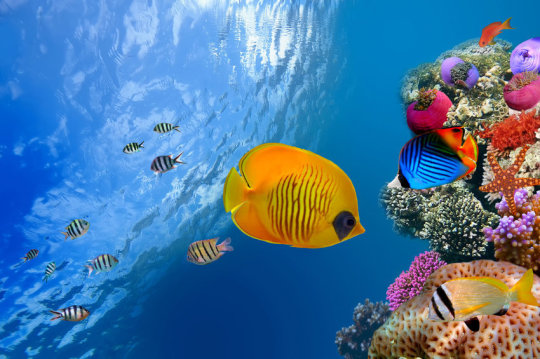 Scientists have solved the mystery of why some closely-related species of an iconic reef fish have vastly different colour patterns, while others look very similar.

Innovative research led by scientists at the ARC Centre of Excellence for Coral Reef Studies based at James Cook University, examined the differences in appearance of 42 species of the butterflyfish.

They found that on reefs where closely related butterflyfish species ranges overlap, the differences in colour patterns between the two were most pronounced.

The team used high-resolution digital colour photographs to quantify colour patterns and explore how they were influenced by evolutionary processes.

“Our results show that, over millions of years, butterflyfishes have evolved the greatest diversity of visual markings when they live in the same area as other, closely related species,” said lead author and PhD student Christopher Hemingson.

“Crucially, we also found that this only happens when both species have ranges that are of similar sizes,” said Mr Hemingson.

“We were surprised to find that when one species’ range is a lot larger than the neighbouring species, the pattern is reversed — with the colour pattern of overlapping species found to be less different,” said co-author Dr Peter Cowman.

Professor David Bellwood, a co-author and senior investigator, noted that this is the first time geographic range dynamics have been shown to be an important predictor of colour differences among marine fish species.

“This research is the first of its kind to quantify colour and pattern differences simultaneously among butterflyfish species. It showed us that colour pattern differences can evolve very quickly among species (within 300,000 years) but then remain stable over millions of years,” said Professor Bellwood.

“These colour patterns also depend specifically on what other species are also present. It is an interesting piece to the puzzle and may help explain why reef fishes are so colourful.”