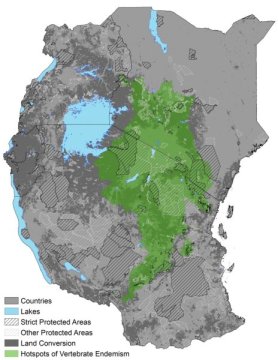 According to their publication in the open-access journal Global Ecology and Conservation, 86% of ecoregions in East Africa have achieved the Convention on Biological Diversity’s Aichi Target 11 goal of protecting at least 10 percent of each ecoregion by 2020. However, three ecoregions (two in the deserts of northern Kenya and the coastal forests of southeastern Tanzania) are poorly represented with less than 10 percent of their area under some form of protection.

“While a 10 percent protection target may be an arbitrarily low bar, it does show that countries have made substantial progress in achieving the targets set by the international community,” said lead author Jason Riggio, a UC Davis postdoctoral scholar in the Department of Wildlife, Fish and Conservation Biology.

Using the same target for the protection of endemic and near-endemic species (those that have at least 90 percent of their entire distribution contained within East Africa), the researchers found that protected areas cover at least 10 percent of the distribution of 256 of 303 East African endemics. However, many (37 percent) of these species’ ranges do not have 10 percent coverage by strict protected areas.

“We use the protection of endemic species in the region as indicators of representativeness as these species necessarily have small ranges and their conservation outlook is primarily driven by conservation decisions made at local and regional levels,” said Tim Caro, co-author on the paper and a professor in the UC Davis Department of Wildlife, Fish and Conservation Biology.

“Our results provide very strong evidence that strict protection has been successful in safeguarding habitat,” said Andrew Jacobson, co-author and incoming professor at the Center for the Environment at Catawba College in North Carolina.

Their analyses indicate that the East African network of protected areas is extensive in both number and area, that it protects most natural habitats effectively, and that further expansion of protected areas to cover some priority biodiversity conservation areas is still possible and necessary. The paper recommends focusing on increasing representation in northern Kenya, in coastal forests in southeastern Tanzania, and on targeted reserves in Central and Western Uganda.