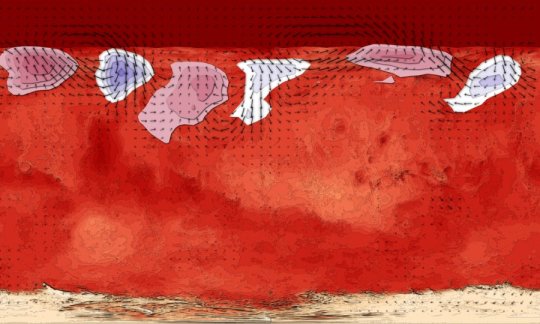 Mars is experiencing an estimated 15.8-million-square-mile dust storm, roughly the size of North and South America. This storm may not be good news for the NASA solar-powered Opportunity rover, but one Penn State professor sees this as a chance to learn more about Martian weather.

Steven Greybush, an assistant professor of meteorology and atmospheric science and Penn State Institute for CyberScience faculty co-hire, studies numerical weather prediction and the weather and climate of Mars.

“We are seeing the impact of this storm on Opportunity because it has caused it to shut down,” Greybush said. “Opportunity is in the heart of the storm.”

Beginning on June 13, NASA was unable to contact Opportunity and it is believed that lack of sunlight has caused it to suspend operations to save energy. Opportunity, which originally launched on July 7, 2003, as a part of NASA’s Mars Exploration Rover program, was designed to search for and characterize rocks and soils that hold clues to past water activity on Mars. These studies may give researchers key information about the possibility of life on the planet.

Outside of the concern for the rover, Greybush said that the observations of these storms provide researchers with a wealth of data about weather, allowing them to more accurately model the atmospheric conditions along with getting closer to the possibility of being able to forecast the weather on Mars.

“If we can learn more about the atmospheric conditions of Mars, we may be able to land in more interesting places, such as those with hills and craters rather than flat terrain,” Greybush said.

Greybush is working on a tool called Ensemble Mars Atmosphere Reanalysis System (EMARS). The system takes measurements received from orbiting spacecraft, such as temperature or dust, and combines the information with computer simulations using a process called data assimilation. EMARS creates a sequence of maps of winds, temperatures, pressures and dust at hourly intervals over six Martian years. A Mars year is 687 Earth days.

With this information, Greybush can follow the evolution of dust storms and track how they grow from a local-scale dust storm to planetary scale.

Along with tracking the storms, Greybush can use EMARS to compare the current dust storm to previous storms. This method yields important insights into the variability of Mars’ weather patterns over time.

Hartzel Gillespie, a doctoral graduate student in meteorology working with Greybush, studies the traveling weather systems of Mars. Gillespie said that there are hypotheses that the winds of the weather systems may cause the formation of these dust storms.

“The current Martian dust storm will provide an interesting case study for that hypothesis,” Gillespie said. “It would be quite interesting if we were able, in the future, to show that this dust storm was caused by a particular traveling weather system.”

Local and regional storms take place on Mars yearly, but estimates say that global storms occur once every three or four Martian years, which is six to eight Earth years.

Global storms can occur from intense winds lifting the dust off of the ground — sometimes up to 24 miles in altitude. As dust is carried higher into the atmosphere, it gets caught in faster winds and can be moved across the planet. It can take up to several weeks for the dust to settle.

“A lot of storms begin in the northern hemisphere and then fizzle out, so why did this northern storm make it past the equator and become so large?” Greybush asked. “The last global storm was in 2007. Each storm is unique, and this provides a new example for case studies.”

Mars is the planet that is most like Earth, as it shares similar characteristics and history, but the stark differences, such as the nature of its extreme weather, are what researchers are aiming to understand.

“People ask why we study Mars’ weather and the simple answer is scientific curiosity,” Greybush said. “We want to know what storms and weather are like on other planets. Are they similar or are they different? These dust storms give us data and insight into these processes.”

Materials provided by Penn State. Original written by Miranda Buckheit. Note: Content may be edited for style and length.