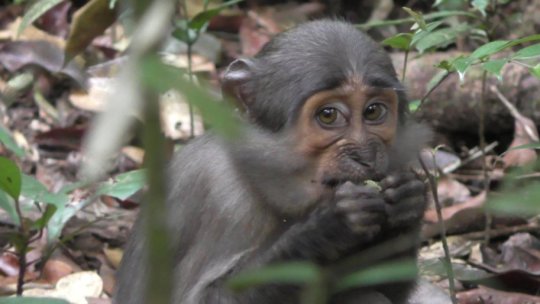 To investigate the scavenging behaviour first author Bryndan van Pinxteren of the University of Amsterdam analysed all video material from the camera traps by scoring the visiting behaviour of mangabey monkeys, fowl species and squirrels to chimpanzee nut-cracking sites in relation to known nut-cracking events. Furthermore, since mangabeys are infrequently preyed upon by chimpanzees, he investigated whether they perceive an increased predation risk when approaching nut remnants. In total, 190 nut-cracking events were observed in four different areas of Tai National Park, Ivory Coast.

After detailed analyses the team confirmed that mangabeys scavenged on the nuts cracked by chimpanzees and hogs, and that this behaviour enabled them to access food sources that would otherwise not be accessible. For example, one of the fresh nut species (Panda oleosa) needs to be cracked by chimpanzees using heavy stones. They are too hard, and mangabeys cannot open them using their teeth. Mangabeys were also present more often at the nut-cracking sites after chimpanzees and red river hogs had cracked nuts, suggesting that they were attracted to the nut-cracking events. White-breasted guinea fowl, helmed guinea fowl, and several squirrel species, which previously had been observed to scavenge on these nut remnants, were not present more often at the nut-cracking sites after nut-cracking events, suggesting that mangabeys, but not the other species, were potentially more motivated to approach nut-cracking chimpanzees and hogs and to profit from their nut-cracking skills.

“After studying both species for many months, I remain intrigued by the puzzling relationship between mangabey monkeys and chimpanzees. At some moments the monkeys seem to be scared of these potential though infrequent predators, while at other times they approach chimpanzees within meters to profit from their tool-using skills, as if they had learned to anticipate the other species ‘mood’,” says Karline Janmaat of the University of Amsterdam and the Max Planck Institute of Evolutionary Anthropology.

Mangabeys showed elevated levels of vigilance, measured by noting down how often the monkeys watched their distant surroundings at the chimpanzee nut-cracking sites compared with other foraging sites, suggesting that they perceived elevated danger at these sites. This could be explained by the tendency of chimpanzees to hunt monkeys. The elevated level of vigilance during scavenging is therefore consistent with the possibility that the mangabeys encounter a dilemma between an opportunity to gain a high amount of “free” energy and increased predation risk. “The decisions of mangabeys to approach food left-overs from potential predators, may imply contextual knowledge that helps the monkeys to judge when they are safe and when they need to be vigilant or move into a safe position,” adds Janmaat.

“This same type of decision-making behaviour might also have been present in our early human ancestors who could obtain free food — hard to acquire otherwise — from dangerous predators by scavenging on their left-over prey carrion. Therefore studying the monkeys’ behaviour might give us insights in the origin of our own decision-making skills.”

“What is sad is that the forests in which we observed the monkeys’ intriguing behaviour are disappearing at an alarming rate,” says Bryndan van Pinxteren. “We are not only losing these forests, but we also lose our evolutionary history, since all our closest living relatives live in the rain forest.”