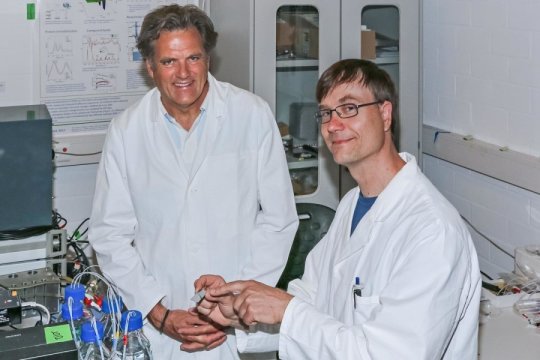 Using an infrared sensor, biophysicists at Ruhr-Universität Bochum (RUB) have succeeded in analysing quickly and easily which active agents affect the structure of proteins and how long that effect lasts. Thus, Prof Dr Klaus Gerwert and Dr Jörn Güldenhaupt performed time-resolved measurements of the changes to the structure of protein scaffolds, which were triggered by the active agents. Their methods might one day help develop drugs with little side effects in a quick and targeted manner. The team published a report on their research, which was conducted under the umbrella of the EU-funded programme Innovative Medicines Initiative in the project Kinetics for drug discovery (K4DD), in the journal Angewandte Chemie on May 17, 2018.

Active agents can alter the structure of target proteins

The efficacy of many drugs is based on the fact that they manipulate the metabolism of cells by inhibiting the activity of specific proteins. To this end, the drug molecule must bind to the respective target protein, while the active agent more often than not settles in the functional compartments of proteins, which are often hollow like a pouch.

In the case of some active agents, binding to the target protein additionally alters the structure of the protein surface. Following so-called conformational change, new surface areas and binding pouches become accessible, and an active agent can be further adapted to match them. This process often results in a better selectivity of active agents, thus reducing side effects.

“The way an active agent affects the structure of its target protein has so far been analysed using time-consuming and material-intensive methods, which may provide extremely detailed spatial information, but which don’t yield results until weeks or even months later,” explains Jörn Güldenhaupt.

Developed by the researchers from Bochum, the new method provides information on structural changes within minutes, and it can even narrow down the type of structural change. The sensor is based on a crystal that is permeable for infrared light. The protein is bound on its surface. Infrared spectra are recorded through the crystal, while the surface is rinsed with solutions with or without any active agents. The sensor detects changes to the protein’s spectral area that is structure-sensitive, i.e. the so-called amid region, which is characteristic for the scaffold of a protein. If any changes occur, it is obvious that the active agent has altered the shape of the protein.

In collaboration with the company Merck, the team demonstrated the reliability of this method by analysing the way two different active agent groups affected the heat shock protein HSP90. It is a folding helper that assists newly generated proteins in the cell to form the correct three-dimensional structure. Due to their extremely active metabolism, tumour cells require it very urgently. HSP90-inhibiting active agents constitute an approach for the development of drugs that stop tumour growth.

Binding period determines how often a drug has to be taken

The research into the infrared sensor was performed under the umbrella of the EU project Kinetics for drug discovery (IMI Grant Number: 115366). In the course of the project, the significance of the temporal element of the interaction between active agent and target protein, with particular focus on its complex life span, was analysed in a consortium made up of 13 university groups and seven pharmaceutical companies from seven European countries.