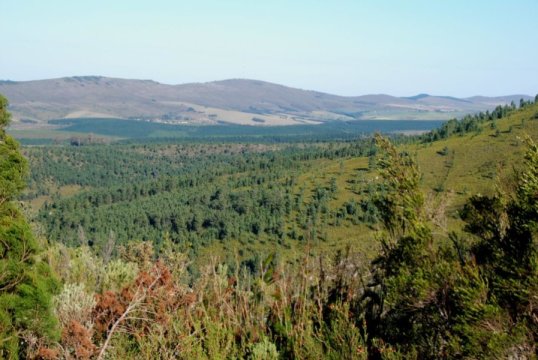 The replacement of natural fynbos vegetation with pine plantations in the southern Cape, and the subsequent invasion of surrounding land by invasive pine trees, significantly increased the severity of the 2017 Knysna wildfires.

This is one of the findings of a study published in the journal Fire Ecology by a research team from the DST-NRF Centre of Excellence for Invasion Biology (CIB) at Stellenbosch University, Nelson Mandela University, SANParks, and the CSIR. The aim of the study was to assess the climatic, weather and fuel factors that contributed to one of the region’s worst fires ever recorded.

Over four days in June 2017, the Knysna fires burnt 15000 hectares, claiming the lives of seven people and destroying more than 5000 hectares of commercial pine plantations and over 800 buildings.

The researchers used satellite imagery to compare the landscape before and after the fire, including the type of vegetation covering the different areas. This information enabled them to estimate the amount of biomass consumed by the 2017 fire.

One of the main findings is that the severity of the fire was significantly higher in plantations of invasive alien trees and in fynbos invaded by alien trees, than in uninvaded fynbos. And while the weather conditions were extreme, they were not unprecedented, as similar conditions occurred in the past at a rate of approximately one day every three years. The severity of the 18-24 month drought that preceded the fires, on the other hand, was higher than ever recorded in the historical weather record, and this contributed significantly to the impact of the fire.

Prof. Brian van Wilgen, a fire ecologist with the CIB and one of the co-authors, says large tracts of natural vegetation in the southern Cape have been systematically replaced with plantations of Pinus and Eucalyptus species, increasing above-ground biomass from about four to 20 tonnes per hectare: “Given that more than two-thirds of the area that burned was in one of these altered conditions, our findings demonstrate clearly that fuel loads have substantially increased compared to earlier situations when the landscape would have been dominated by regularly burned uninvaded natural vegetation.”

It is estimated that pine trees have invaded more than 90% of the Garden Route National Park’s fynbos vegetation at various densities. Additional invasions by Australian Acacia and Eucalyptus species cover a further 29% and 14% respectively: “By increasing the amount of fuel available to burn, the fires become more intense and more difficult to control,” he explains. Van Wilgen warns, however, that events of this nature can become more frequent as the climate of the southern Cape becomes more hot and dry, and as the extent of invasions increases. “The conditions that exacerbated the severity of the 2017 Knysna fires will occur again. People need to stay vigilant and implement fire-wise practices, and, more importantly, steer away from placing developments in high-risk areas in the long inter-fire periods.

“Our study underscores the need to implement effective programs to control the spread of invasive alien plants, and to re-examine the economic and ecological sustainability of commercial planting of invasive alien trees in fire-prone areas.”

Some of the other finding include:

Materials provided by Stellenbosch University. Note: Content may be edited for style and length.