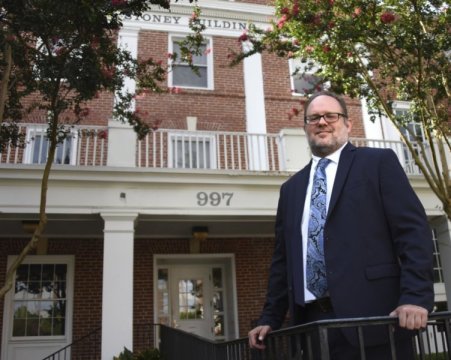 After being found not guilty by reason of insanity, it’s not typically a crime — rather declining mental health or breaking rules of conditional release like not drinking alcohol — that puts people back in a psychiatric hospital or even jail, researchers say.

And, the violence risk-assessment tool most commonly used in making a release decision, called HCR-20, isn’t good at predicting who will end up reincarcerated, says Dr. Michael J. Vitacco, forensic psychologist in the Department of Psychiatry and Health Behavior at the Medical College of Georgia at Augusta University.

“While recidivism rates for these individuals are fortunately low, we want to be able to better determine who needs more services before they are released. If we can do that, we might be able to take that rate down even lower,” says Vitacco.

The study reaffirms the success of conditional release programs, as well as the need to regularly monitor dynamic risk factors — factors that can change quickly like employment status and drug use — associated with violent or other illegal behavior, which provide both red flags and points for intervention, the researchers write.

Next steps should include evaluating other risk-assessment tools’ proficiency at both evaluating readiness for release and predicting outcome, Vitacco, corresponding author, and his colleagues report.

“That means that once you treat the mental illness and take care of some other factors, these people are relatively safe,” Vitacco says. In fact, people with mental illness are the minority of violent offenders or other crime committers, he says. Revenge, greed, anger and alcohol are more likely drivers.

“There are some real consistencies here,” Vitacco said of the low recidivism rates for insanity acquittees the researchers have now found in Oregon as well as Georgia, Virginia, Wisconsin and Maryland. By comparison, the National Institute of Justice reports 67.8 percent of people convicted of committing a crime are rearrested three years after getting out of prison and 75 percent after five years. An Oregon study found about half of those on felony probation are rearrested within three years.

“When it is due to mental illness, they are much more treatable and much less likely to do it again,” Vitacco says, adding that it’s important to counteract myths that most violence is committed by the mentally ill.

However, when treatment and conditional release don’t work out well, there can be bad consequences, which is one of the many reasons Vitacco and his colleagues are working to find even better ways to assess who will and won’t do well on release.

The 20-item HCR-20, or Historical, Clinical, Risk-20, is the most widely used tool to help assess violence risk. It helps mental health professionals — all psychologists in the case of the Oregon study — assess things like past behavior and current dynamics emperically linked to violence.

It’s been suggested that HCR-20 is good at predicting violence among forensic psychiatric patients undergoing assessment for conditional release. But, prior to Vitacco’s study, there were already inconsistent findings about that ability. However, his findings and others’ do not negate HCR-20’s value in assessing overall violence risk and treatment needs, Vitacco notes.

For the study, the researchers also looked at demographic and criminal history data on the 238 individuals, like their clinical diagnosis, length of hospitalization and age when they committed crimes.

Sex, race and age at the time of the offense or release did not appear to be a factor in their success, neither did the number of charges or whether they involved violence. About 56 percent had committed a violent crime. More than half had committed a single offense, 12 percent had four charges against them and a small percentage were tried on as many as 18 charges.

Individuals in the Oregon study had diagnoses of psychosis, mood disorders, intellectual disabilities, substance abuse, cognitive disorders and anxiety. One individual had dissociative disorder, which is often associated with trauma. The majority of the individuals were diagnosed with two disorders and the second one was often substance abuse; 64 had a secondary diagnosis of personality disorder, which interferes with personal and societal relationships.

Psychosis, a thought disorder that interferes with the ability to engage in rational thinking, is a top diagnosis for individuals found not guilty by reason of insanity, Vitacco says, but adds that most people who are psychotic do not commit crimes.

Vitacco notes another issue that needs exploration is whether the type of crime — killing someone as opposed to stealing a car — is predictive of conditional release revocation. “Both individuals broke the rules, but should they be handled differently? That is an important question,” he says.

Balancing community safety and individual rights underscores the importance of accurately assessing whether an individual is at risk for a violent crime once they are released, Vitacco says.

Not guilty by reason of insanity by definition means the individual cannot be held responsible for a crime, even a violent one. “Their mental illness interferes with their ability to differentiate between right and wrong,” Vitacco says.

Most people found not guilty by reason of insanity are committed to a psychiatric hospital, some of which exclusively treat prisoners, for further evaluation and treatment.

If/when they are determined to not be a danger to themselves or others and otherwise ready to return to general society, they typically are given a conditional release. Much like being on parole, that means they must meet certain requirements like taking their medications, abstaining from drugs and alcohol and participating in group psychotherapy, to remain free. Typically they are closely monitored by the state, and a violation can put them back in a psychiatric hospital.

The U.S. Supreme Court has ruled that individuals must be both actively mentally ill and dangerous to be kept in the hospital, and that because individuals found not guilty by reason of insanity were not convicted of a crime, he/she may not be punished for the crime. In fact, the court further stated that there is no clear correlation between a hypothetical criminal sentence and the time it takes the offender to recover. The court accepted that some people found not guilty by reason of insanity, even for a relatively minor on nonviolent crime, might not recover and remain dangerous and require continued hospitalization.