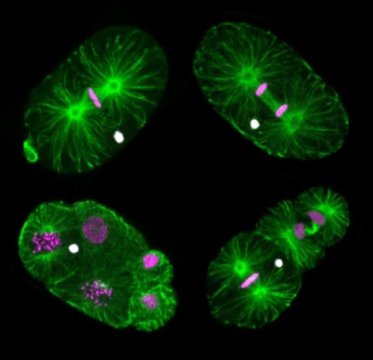 In 1949, the young biologist Victor Nigon described the reproduction of various species of nematodes, small roundworms that live in the soil in its doctoral thesis. These include Mesorhabditis belari, whose rare male specimens are required for reproduction, even though the genetic material found in sperm is rarely used by eggs. The resulting embryo produces a female, who is a clone of its mother.

Seventy years later, this worm has once again drawn interest, this time from an international team led by researchers from the CNRS, l’ENS de Lyon, l’Université Claude Bernard Lyon 1, and the Muséum national d’Histoire naturelle1. They confirmed Victor Nigon’s initial observations, but also noted that in 9% of cases the embryo produced a male when the sperm genetic material was used after fertilization. Males can subsequently transmit their genes only to their sons, making M. belari a unique case in which males make no genetic contribution, and can instead be seen as a simple extension of females by helping them initiate the development of their eggs.

If males do not transmit the genes of their mothers, then at least they must help their mothers produce as many descendants as possible. This is possible only if the sons produced by a female help her daughters produce a large number of embryos. In other words, if the males preferentially fertilize their sisters.

But why would this lead to 9% males, instead of 2% or 20% for instance? By using “game theory,” researchers showed that producing 9% males is a stable evolutionary strategy, as this quantity is enough to ensure that a maximum number of female descendants are produced, without wasting too many resources in the production of males whose genes have no future.

Asexuality is a type of reproduction in which species consisting solely of females produce clones of themselves, as opposed to sexuality, in which individuals of the male sex enable genetic mixing with females. M. belari represents a new case, in which males can be useful to female reproduction, but with no genetic mixing. The research team will now explore how this type of reproduction emerged, and will test the long-term stability of the M. belari species through the study of its genome.