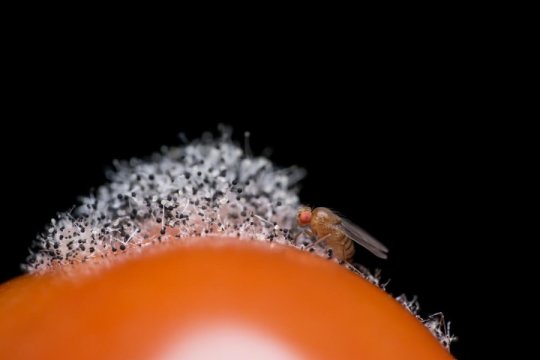 Vinegar flies are always exposed to odor mixtures when navigating in the natural environment. These mixtures often consist of odors which are both attractive and repellent, such as a source of food contaminated with toxic bacteria. The decision to approach or avoid is extremely important for the survival and reproduction of the animal. But so far, little is known about how different odors with opposing values in a mixture are processed simultaneously in the brain. In previous studies, the research groups led by Silke Sachse and Markus Knaden from the Max Planck Institute for Chemical Ecology have already shown that the olfactory channels that respond to attractive scents are different from those which are activated by repellent odors. In addition, previous research has shown that two pleasant odors reinforce each other in certain neural circuits in the fly brain, which is in turn reflected in behavior.

“In this study, we aimed to investigate how odor mixtures of opposite valence, that is, a mix of odors that are attractive and repellent, are processed and perceived,” explains Ahmed Mohamed, lead author of the study, adding: “By taking advantage of the sophisticated genetics available in Drosophila, we elucidated the neural mechanism that enables the animal to evaluate such conflicting situations in order to take the appropriate decision.”

The scientists exposed the vinegar fly Drosophila melanogaster to artificial odor mixtures, each containing an attractive and repellent odor, in defined ratios. By analyzing the brain activity of these opposing odor mixtures using functional imaging techniques, they were able to show that a repellent component in an odor mixture specifically inhibits the odor channels for attractants. “This inhibition correlates with a reduced attraction to the odor source” explains Silke Sachse. The underlying neuronal mechanism and the specific neurons involved could also be identified.

“Our data demonstrate a specific, inhibitory cross-talk in the olfactory center of the fly’s brain. Using further genetic tools we were able to show that glomeruli, spherical functional units in the olfactory center, that respond to attractive odors, are linked via specific inhibitory neurons to the repellent-specific glomeruli,” Ahmed Mohamed describes from the results.

However, not all odor mixtures show the same inhibitory effect. An exception is geosmin, the typical smell of toxic bacteria or mold. Geosmin is recognized in the fly brain by only one receptor type, and thus only a highly specific glomerulus is activated. “It is conceivable that this geosmin glomerulus has no strong interactions with other glomeruli and cannot influence them accordingly,” speculates Markus Knaden, another author of the study. Similar specialized pathways have been described only for the detection of sex pheromones, carbon dioxide and iridomyrmecin, the latter of which is the smell specific to a parasitic wasp that infests vinegar flies.

The scientists assume that this neuronal mechanisms of the fly brain might also occur in other olfactory systems, such as the olfactory bulb of mammals, and therefore also potentially in humans. Such a mechanism could help protect not only flies, but also we as humans to recognize and avoid, for example, contaminated food that emits pleasant as well as bad odors. In the future, the researchers want to investigate whether this neuronal mechanism is modified by other factors, such as physiological state, e.g. hunger [KG/AO].