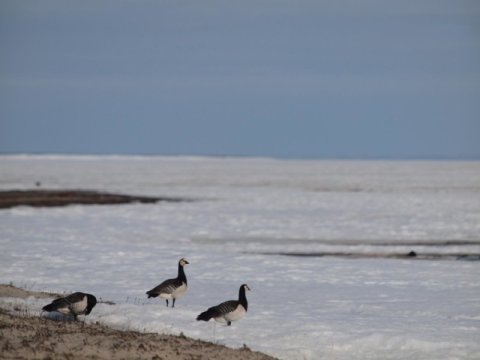 As Arctic temperatures continue to rise, migratory barnacle geese have responded by speeding up their 3,000-kilometer migration in order to reach their destination more quickly with fewer stops along the way, according to new evidence reported in Current Biology on July 19. Unfortunately, the birds’ earlier arrival isn’t making as much of a difference as one might expect. That’s because, when the geese reach their Arctic breeding grounds after an accelerated marathon flight, they must take extra time to refuel their own bodies before laying eggs.

As a result of this recovery period, barnacle goose chicks continue to hatch too late to take advantage of early spring foraging opportunities. The new study shows that fewer of them are surviving long enough to leave their mothers’ sides and make the trek on their own. The findings suggest that the birds are in trouble unless they start heading north for the Arctic earlier in the year, as opposed to speeding up their travel along the way, the researchers say.

“The birds are leaping in the dark as they cannot predict, while being at the wintering grounds in temperate areas, whether it is going to be an early or late spring in the Arctic,” says Bart Nolet of the Netherlands Institute of Ecology and University of Amsterdam. “The weather systems in the temperate and Arctic regions are not linked, and on top of that, temperature rise is far stronger in the Arctic than in the temperate region. Only halfway through the migration, the geese are probably able to judge from environmental cues what spring will be like up in the Arctic, and they are apparently able to speed up if spring is early.”

The researchers, including first author and recent graduate of the Nolet lab Thomas Lameris, combined remote sensing, bird tracking, stable isotope techniques, and field observations along the birds’ entire flyway to explore the effect of climate warming on migration and breeding times of barnacle geese. The geese travel every spring from their temperate wintering and staging grounds along the North Sea coast via stopover sites along the Baltic Sea and Barents Sea to their breeding grounds in the Russian Arctic.

The evidence shows that egg laying has advanced much less than the birds’ arrival in the Arctic because the geese must take time after their arrival to refuel. In years when spring came early, the geese laid their eggs well after the snow began to melt. As a result, there was a mismatch between the time that their goslings hatched and peak food quality. In years with a larger mismatch, the researchers report, goslings experienced reduced survival in the month after hatching.

The researchers say that the geese can only fully adapt to the rapid warming of the Arctic when they find ways to depart earlier from their wintering grounds. Currently, Nolet adds, barnacle geese most likely rely heavily on cues like day length that aren’t changing with the temperature rise. They might also depend on other cues, including the greening of vegetation, that aren’t advancing as fast in the temperate region as they are in the Arctic.

Whether these migrants can adapt their cue sensitivity and match their migration timing to changing climatic conditions remains uncertain. But there are signs that the geese may be flexible enough to adjust by other means. In fact, Nolet said that some barnacle geese have recently given up migration, breeding instead in the temperate region.

“Geese migrate in families, and young learn the route and timing from their parents,” Nolet says. “On the one hand, this leads to traditional patterns; on the other hand, it can lead to rapid adjustments when some birds experience that doing the migration differently — often induced by extreme weather events — pays off.”

Through comparisons of the migratory and non-migratory geese, his team hopes to learn more about the costs and benefits of migration.

Financial support was provided by the Netherlands Organisation for Scientific Research and a Marie Curie Intra-European Fellowship.